On our last day in Cambodia plans changed twice. The bird park we wanted to access by boat was too expensive so quick-thinker Chantrea took us to the cultural village instead. There we watched three shows, one telling a love story, one demonstrating Khmer weddings and one portraying the Chinese new year. While the Apsara dancing we saw last year was not so spectacular, with a little background knowledge especially the play was very entertaining. Great performance by the actors. The Chinese new year show included two clowns, and while I find very few clowns funny, it was interesting to similar this kind of humor is in different cultures. Afterwards we went to a local market to buy fruit, rice and meet, that Chantrea chose (it included Chicken liver and two whole small birds). He let us in on a secret: Although the Angkor temples are closed to visitors after 5:30, the area itself is not closed off. Many families go in the evening to have dinner in front of Angkor Wat. That was our plan as well, but by the time we got there, it was dark for one and pouring on top of it. So we climbed into one of the little huts of a food stand, sat on the wooden floor and ate our food there, amidst Khmer families and protected from the rain. (In case I haven’t told you, I ate meet in Cambodia, because there were many foods I wanted to try and because it made Tim very happy on top of that. I have stopped though, as it seems to mess up my stomach more than necessary.) Needless to say the food was amazing and very worthy a last dinner with our friend. 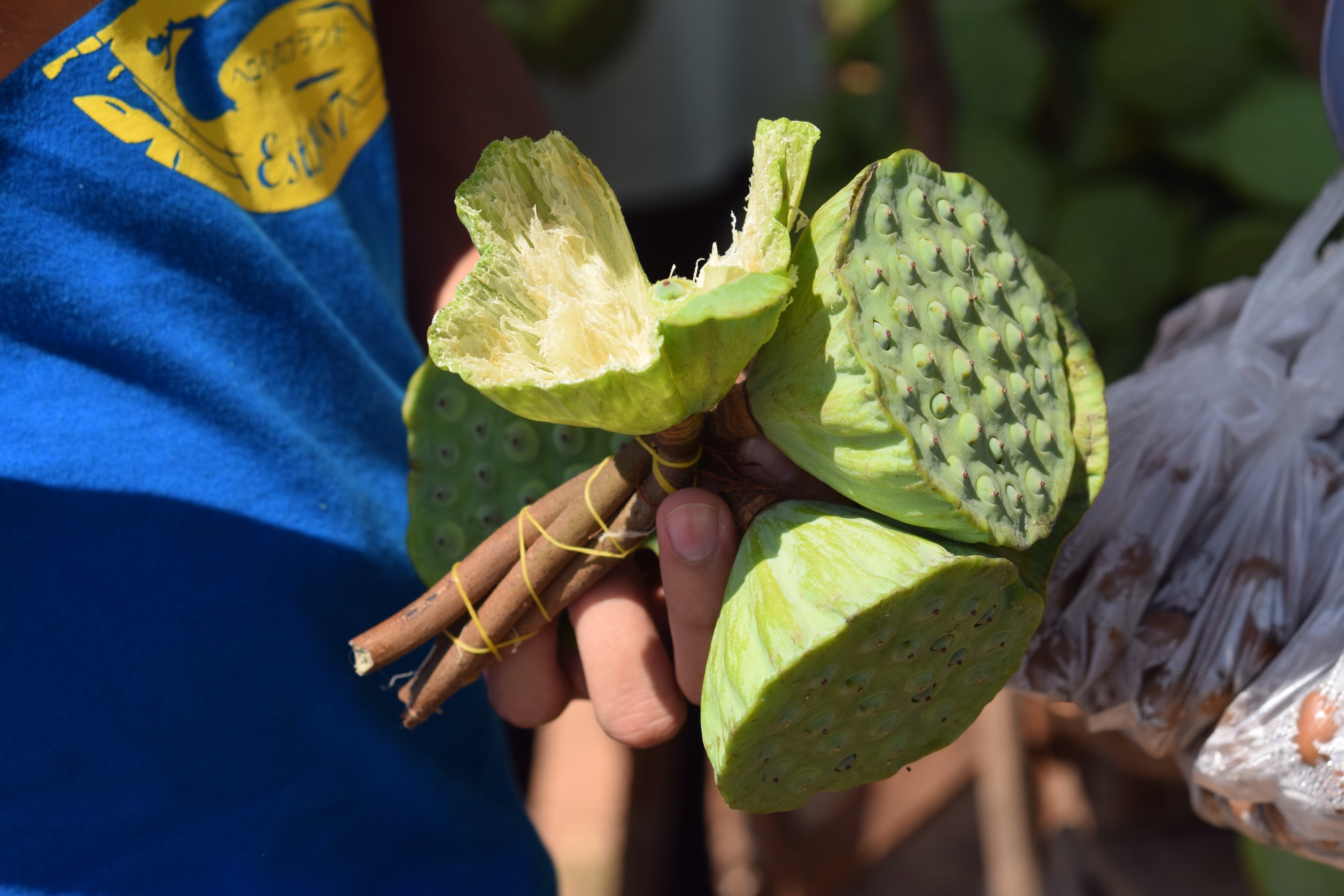 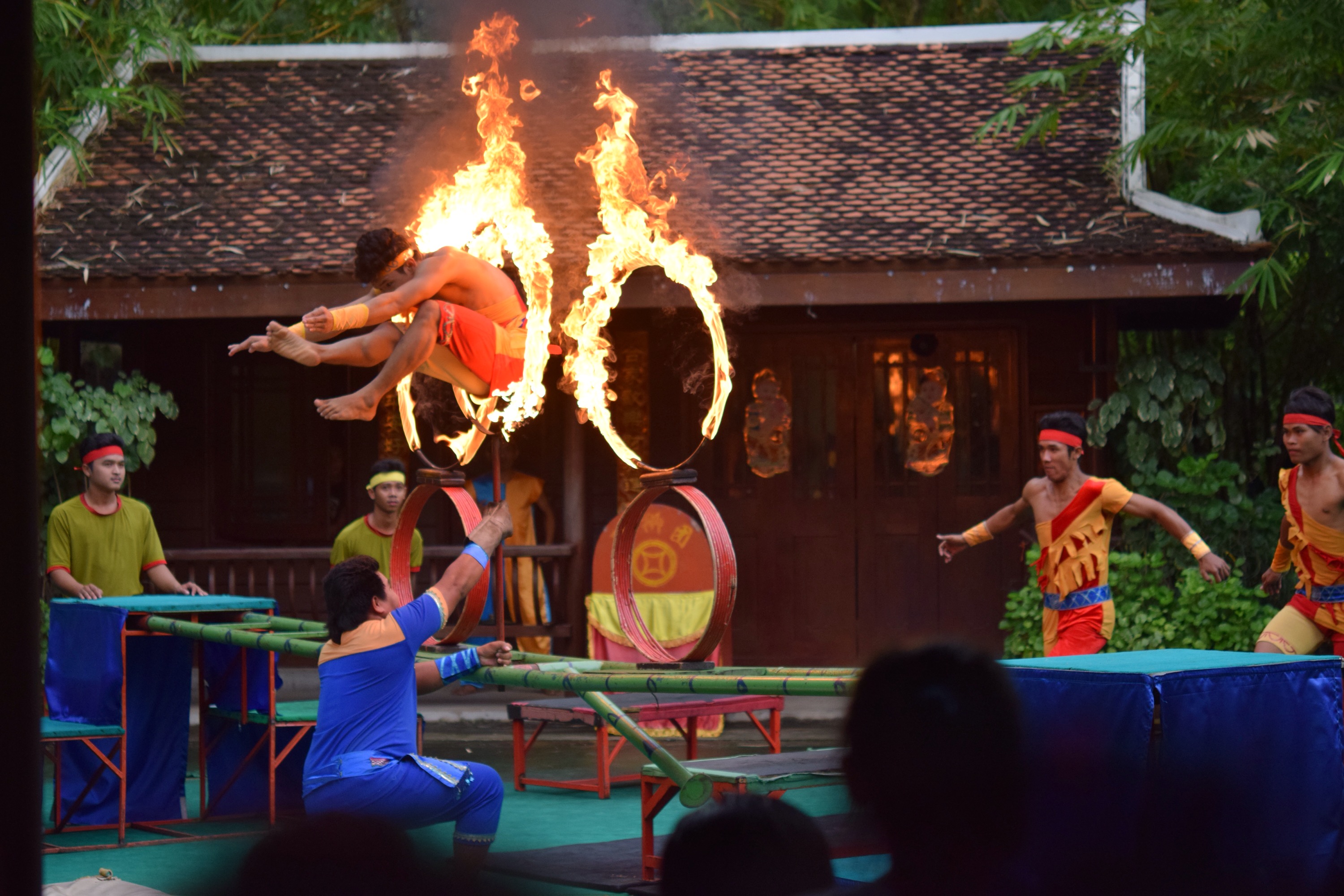 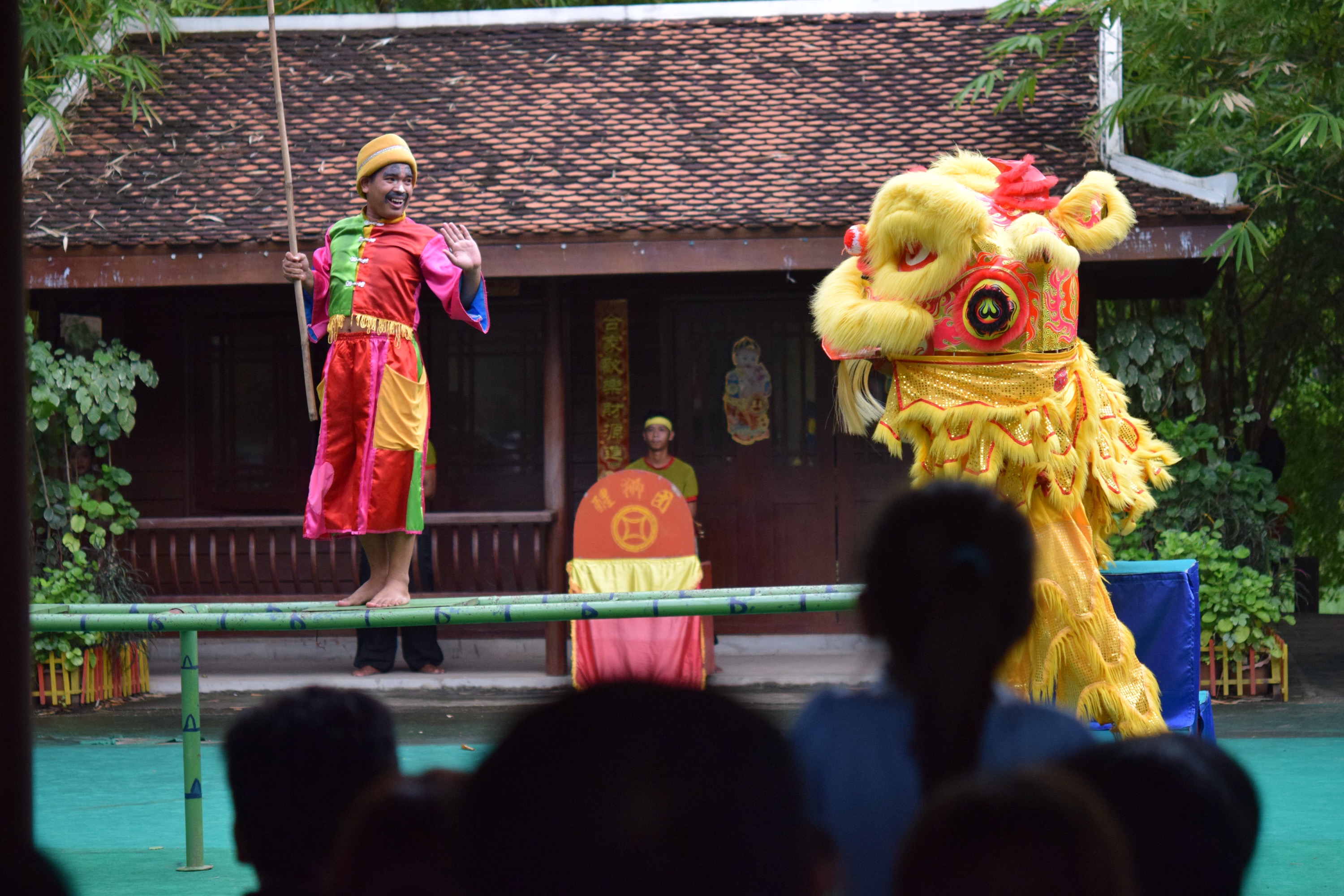 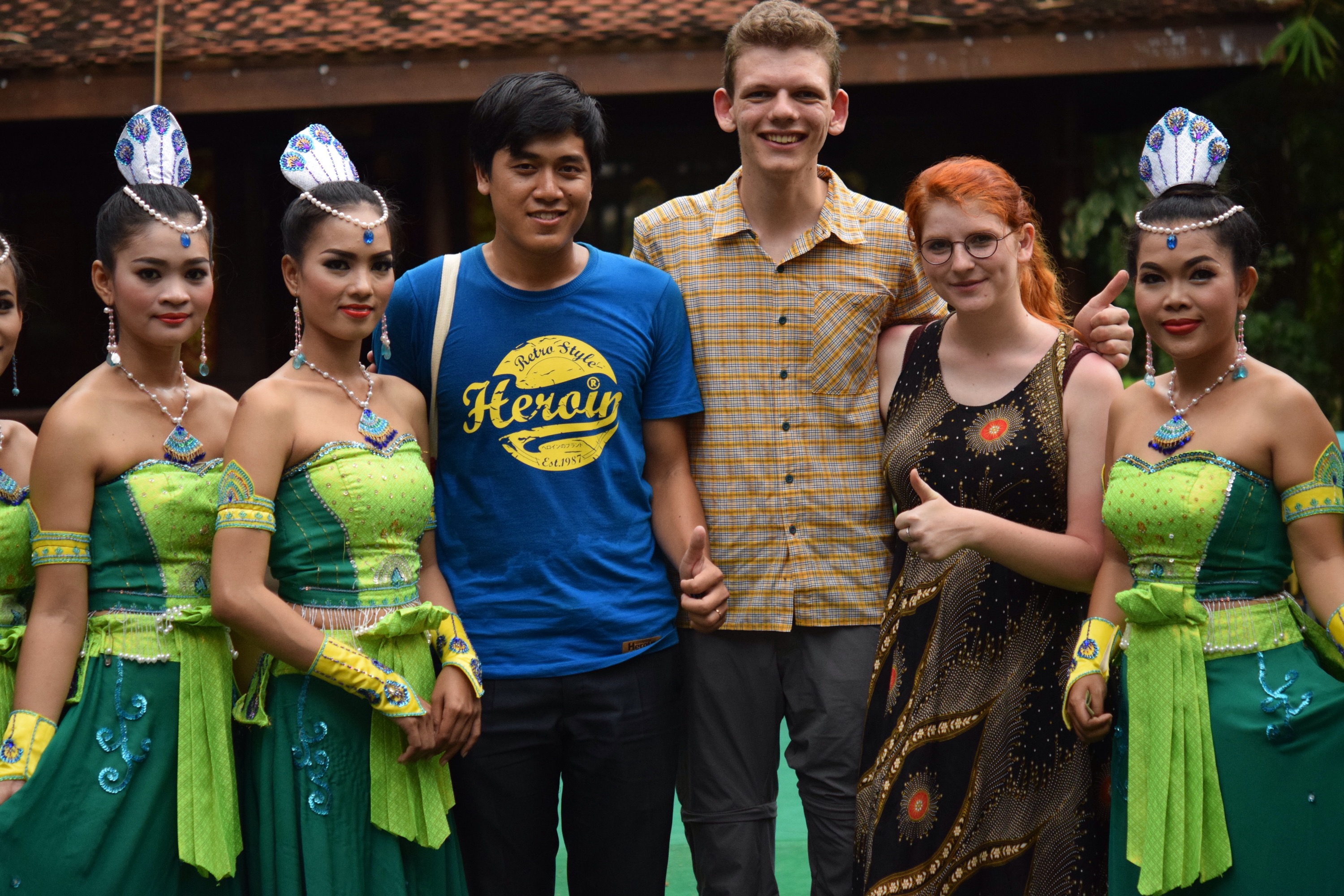 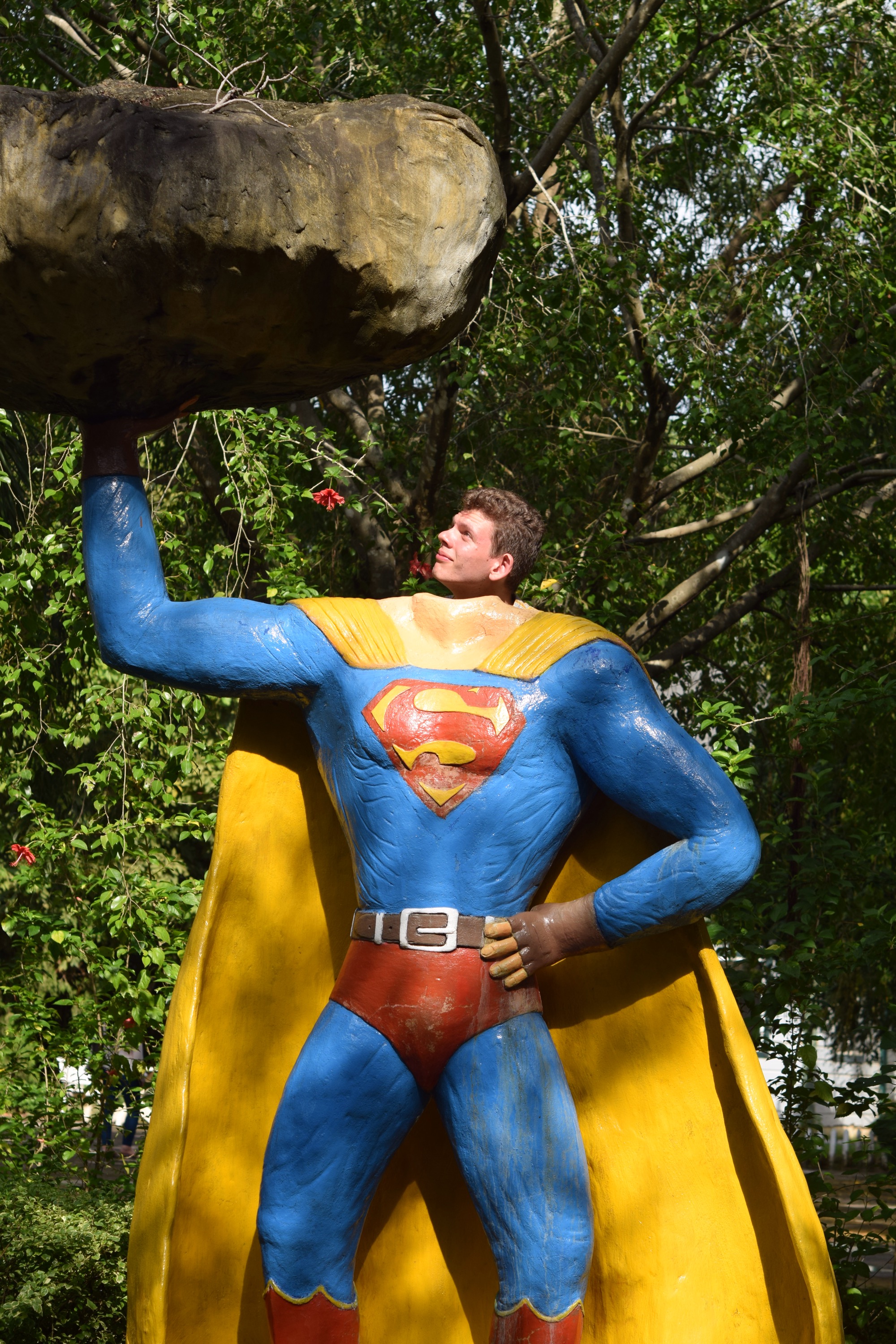 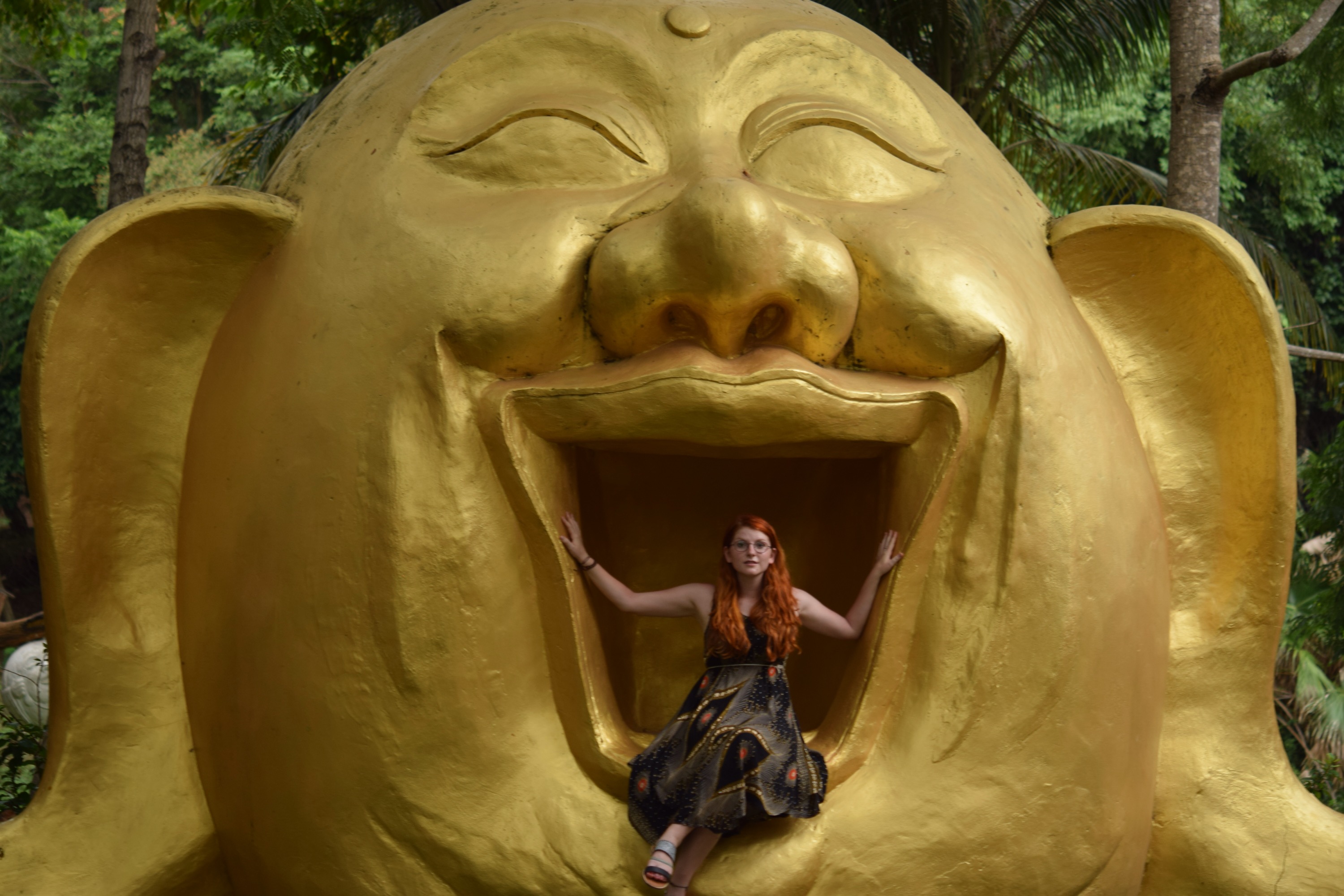 Episode 2:
From Siem Reap it took us 24 hours to reach our next destination, Koh Tao. Crossing the border was uneventful, although this time they did pick up on my passport not being valid long enough. I offered them the new one, but in the end the lady told me to not show my new one when leaving the country. Eight hours later, we finally reached Bangkok’s northern bus terminal, Mo Chit. There I thought it would finally be time to acquire a Thai sim card to be able to keep contact with fellow travellers, but nada. 7eleven had an offer of everything-but, and when after activating the less than ideal 7 day sim card it still didn’t work, I had them refund me. The procedure took ages, and we knew buses to Koh Tao only left from the southern bus terminal. Those who have seen Asterix conquers Rome (if thats the actual title) can imagine our hunt for the right mini van similar to Asterix and Obelix racing up and down one set of stairs after the other. For us they weren’t stairs luckily, but running back and forth through the rain was no more pleasant. Another one hour to the southern terminal, then three hours of waiting, then 12 hours to Koh Tao. In Chumphon we had to switch from the bus to the ferry. The thing with Thai buses is as followed: Most people are not very versed in the English language, and even when they are, they choose to keep you in the dark as much as possible and just usher you from one vehicle into another. Breathing only gets easier when you arrive at the next vehicle with the name of your destination on it 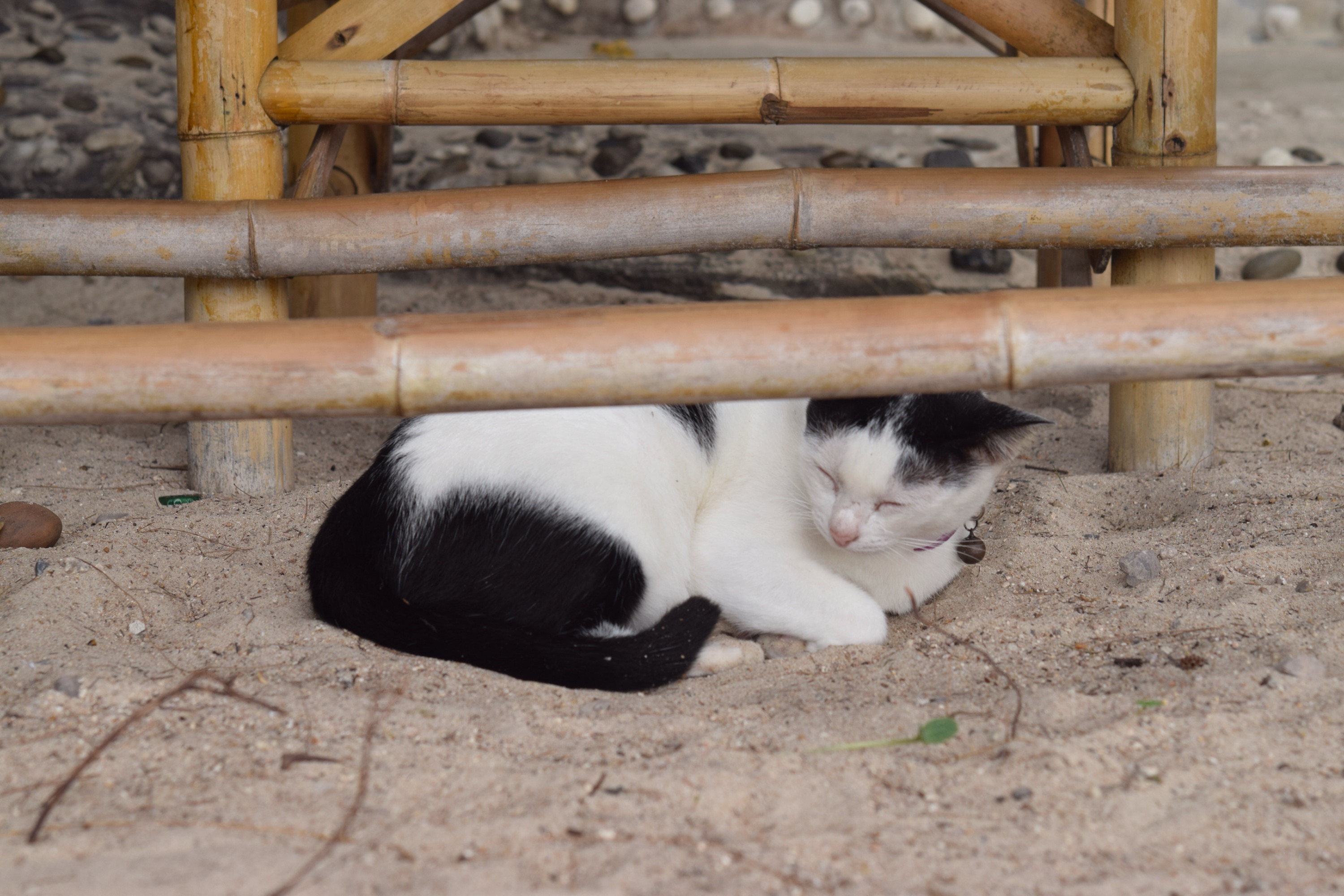 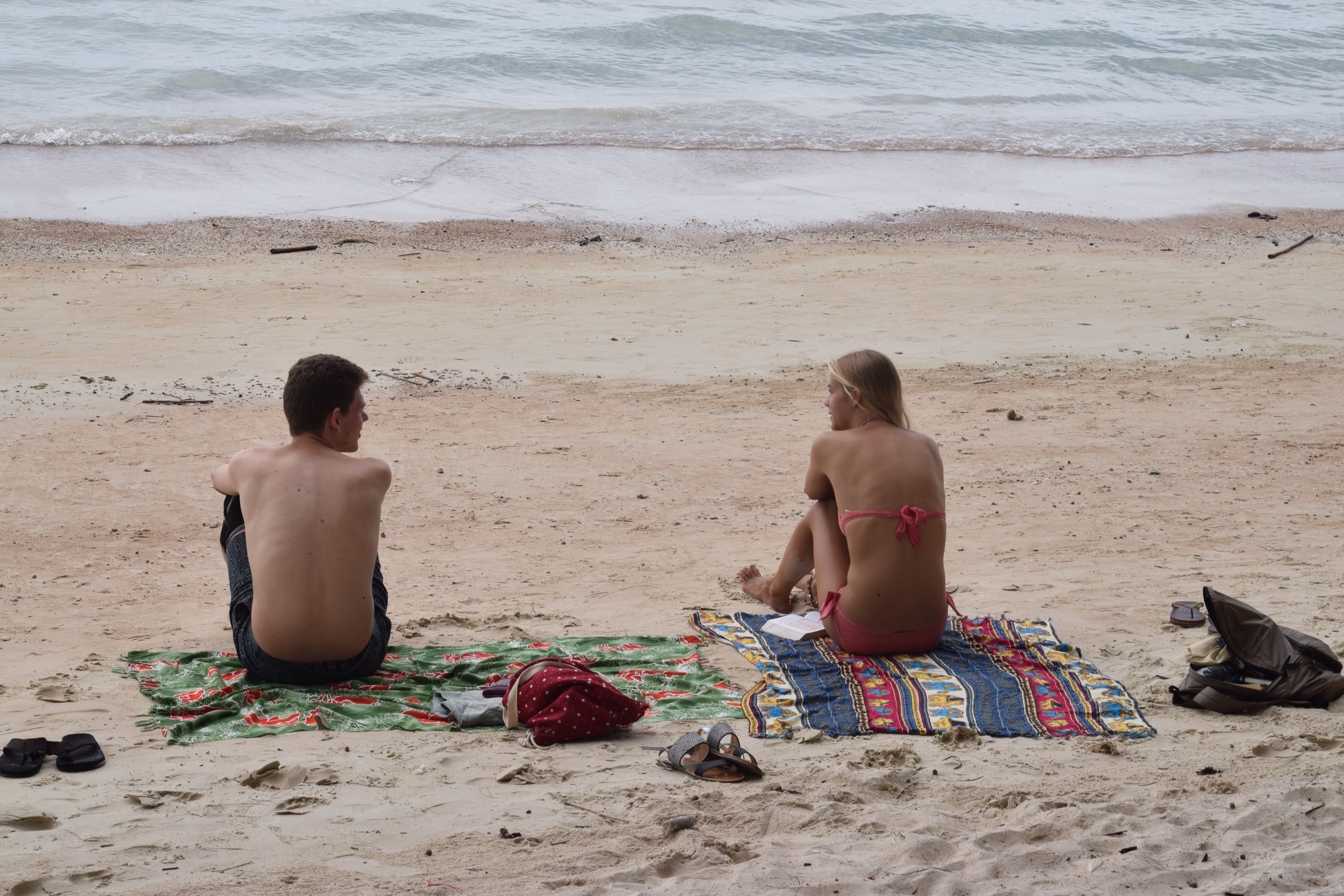 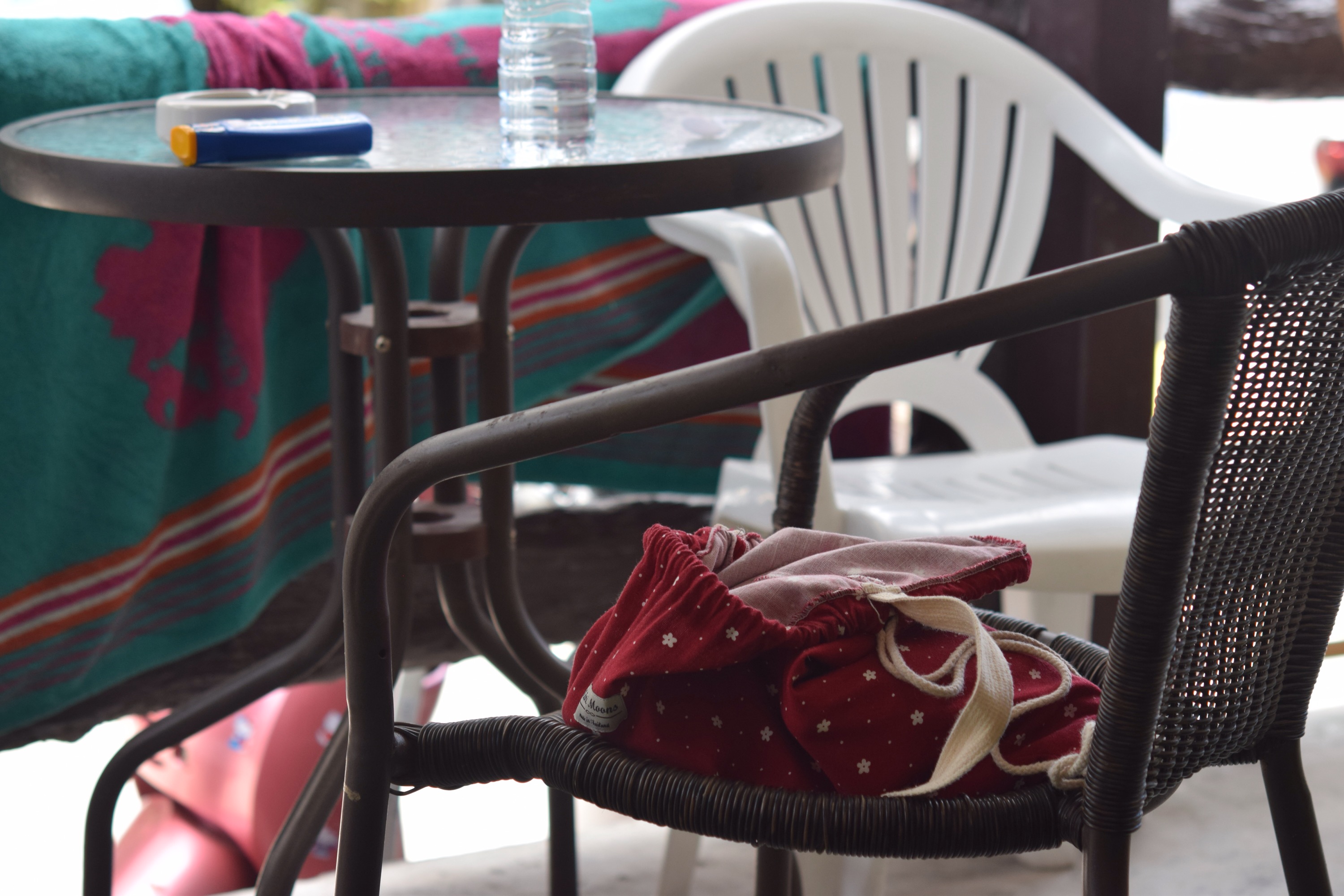 Enjoying Koh Tao was difficult in the beginning. My stomach had turned from a slightly unsettled kitty into an utterly pissed off tiger and I began living on three oreos and a sandwich a day. The oreos I only ate to make sure I had enough energy for my dives, because eating anything with more flavor or texture would make diving impossible. Koh Tao was also very different from the way we imagined it. Touristy, sure, still dreamy though, but mainly it is also a huge dive hub. One dive school hugging the next, with offers and prices jumping at you, flyers being handed out constantly. So, touristy refers mainly to backpackers, no families. Even most dive masters and instructors started as backpackers once, who wanted to do one of the courses, got hooked and than stayed. Some for months, some for years, some for half their life. At the Big Blue, where we went diving, all of them were exceedingly cool. Upbeat, understanding, funny, interested. Our second dive master Hadar described it as making every customer feel effortlessly special, which is why she decided to stay, then leave, then come back. The dives themselves ranged from enjoyable to awesome to crazy.
I started with a refresher to be sure. I didn’t need to do it, but I remembered my difficulties I had before and decided it would help my confidence, which it did. My chest felt tight, my contacts threw a riot, but I survived in an elegant manner. Because of my refresher, Tim (who learned to do a backflip) and I did not dive together that first day. Instead he hung out with a cool guy named Charlie and the very excited Sanne. These dive sites were rather crowded, but we still got to see some cool fish like the murray eel and titan triggerfish. On the second day, the dive site changed. Hadar described that as bad news, which they weren’t really. Reason for the change in plans was the very awesome siting of the morning group: a juvenile whale shark close to Laem Thian caves. Of course if we had seen him, too, that would be in this post’s headline, so we didn’t. I still appreciate the school taking this into account though, as they did with a dive site change later, because of too many jelly fish at the second designated site. It changed to red rock, where Tim and I had dived the day before, so it wasn’t worth it going down. At the same time though, Tim wouldn’t have been able to go anyway. At Laem Thian caves, where we saw unicorn fish, pipe fish, and crocodile needle fish, we did a tight swim through. Hadar was already heading back to warn Tim but at that point he had already tried to push himself through and grabbed right into a crown of thorns starfish. Clouds of blood flooded away from his fingers and made it look way worse than it actually was. Since it didn’t hurt too badly, he held onto his fingers and we continued the dive in a normal, whale shark less way. As we were trying to make our way to the boat against the current, Hadar saw the first jelly fish. It was a very small one, so we took a good look and tried to stay away from it. But oh hey, there are two more jelly fish! And a bunch more over there. Back on the boat quite a few divers had slight jelly fish burns and on the way to the second dive site there were so many of them in the water, that we could see them from the surface. No one got seriously hurt though, and Tim has been supplied with vinegar wraps and pills to reduce the swelling. In two days he will be fine again. 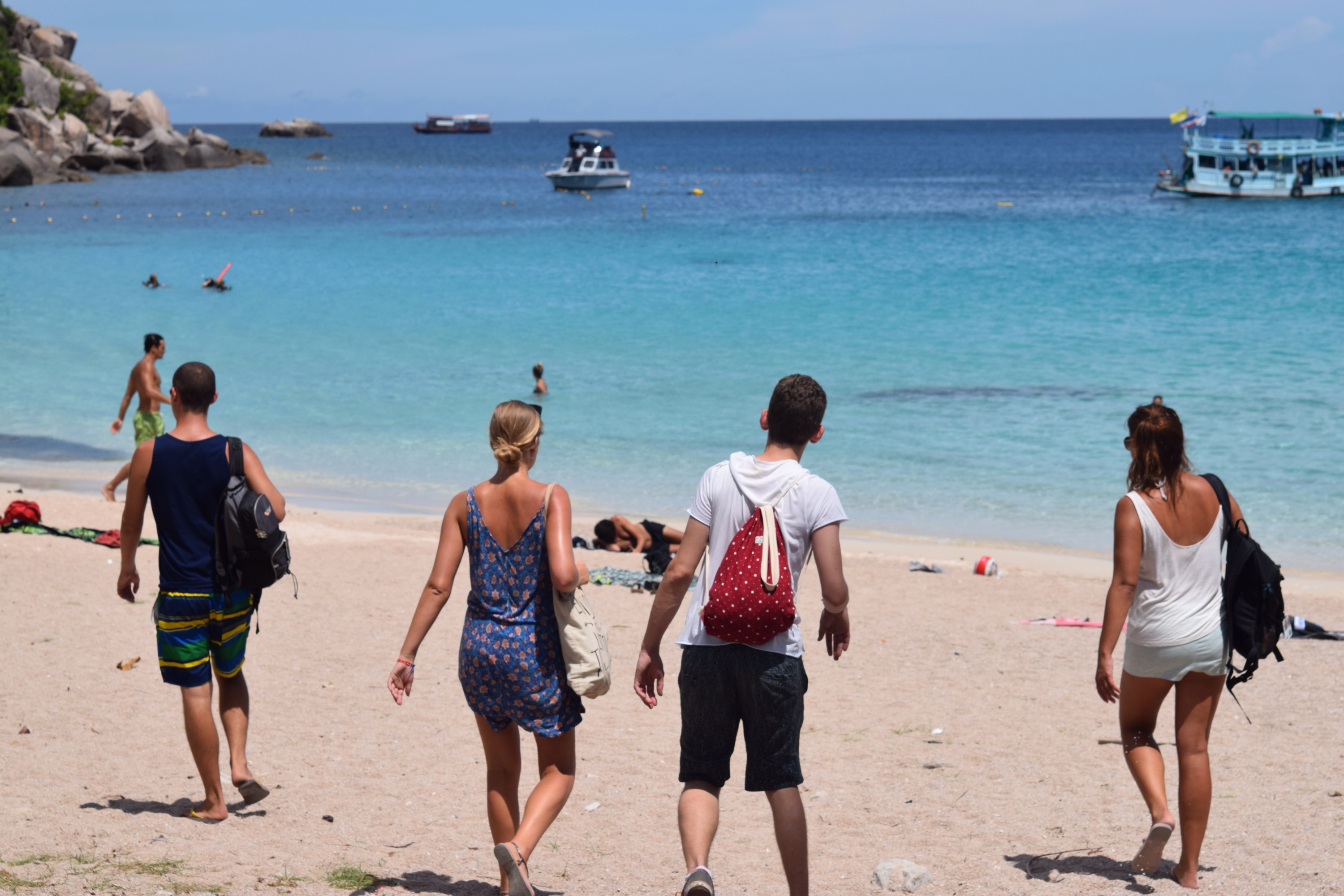 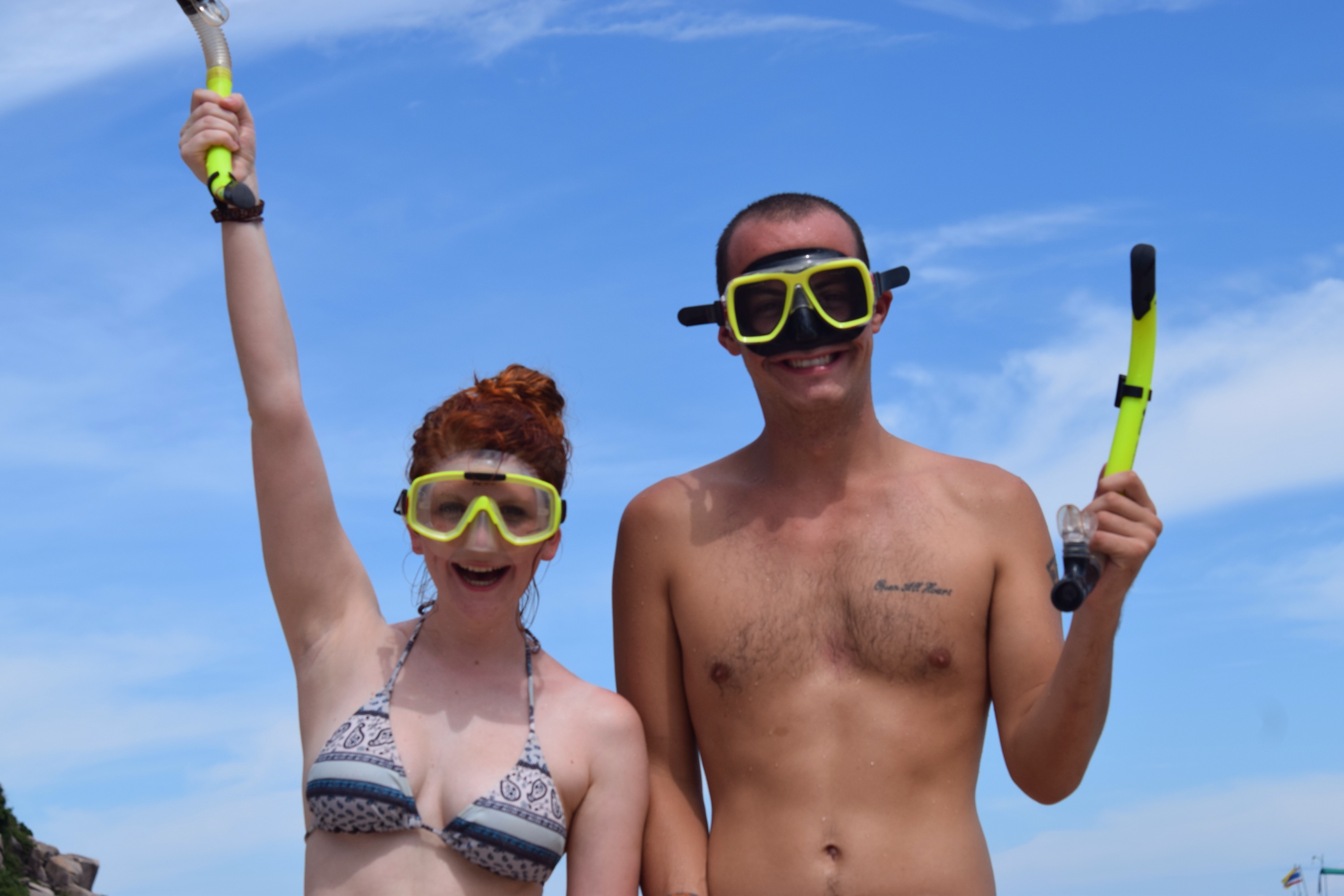 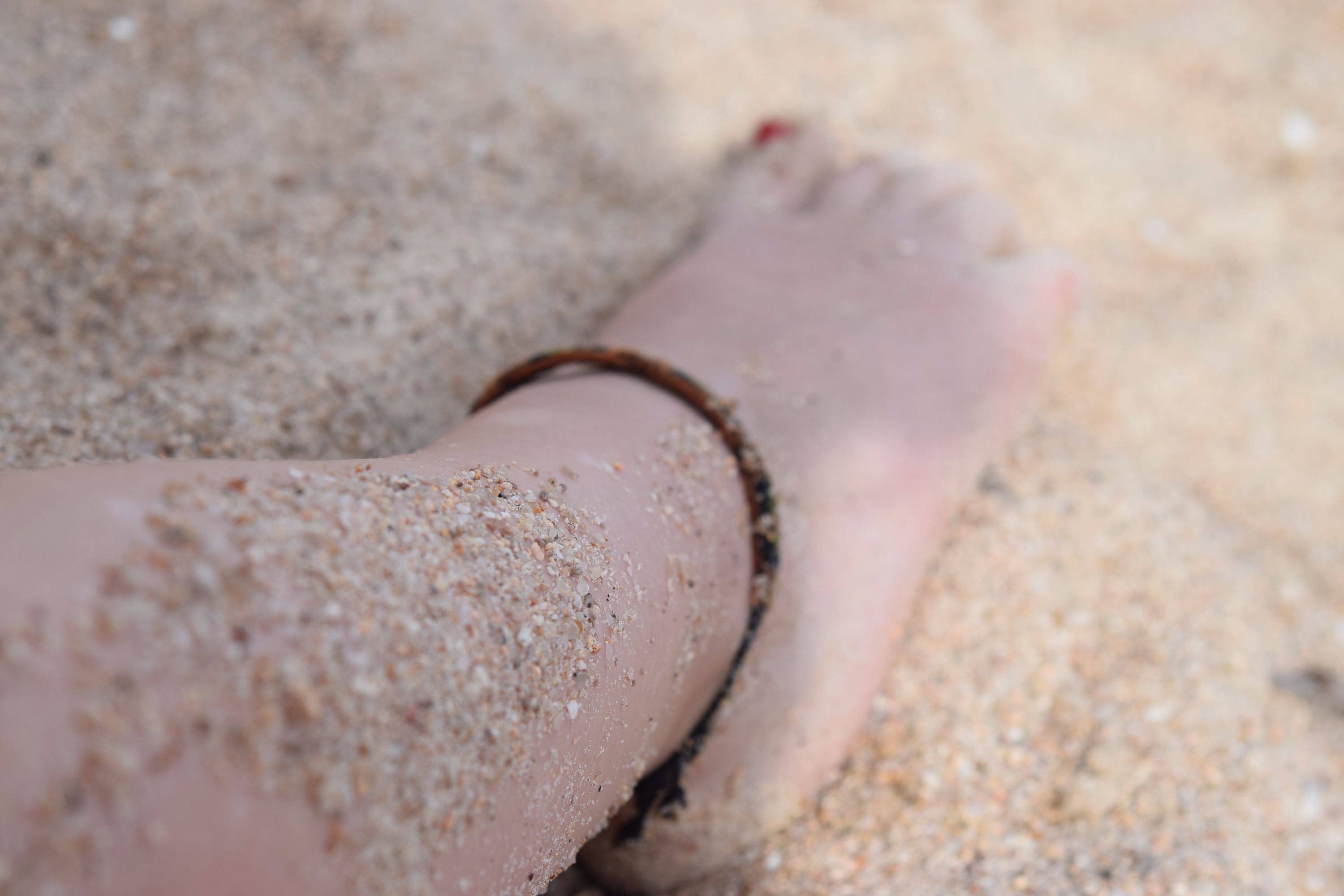 Other than that our hostel on Koh Tao was pretty shite. The last night, after a midnight swim in the ocean, the air con went on and I froze so badly I couldn’t sleep. Another bonus were the showers that reeked of sewage, but due to a bunch of cool people it was endurable. One of them, Mike, who I went swimming with and who taught me how to ride a scooter, we hope to see again on Koh Lanta. With him and some Dutch girls we drove to another beach to go snorkeling and relax. I saw two huge fish there, colorful crabs and weird animals that were like glued to the rocks above water, then jumped off, sprang into the water and jumped back up on another rock. They were freaky as hell. I also noticed how unbalanced I am, when part of me is above the water. Quite a few times I swept into the rocks, because I couldnt hold on. Underwater I was perfectly fine. Guess I’m a diver after all. 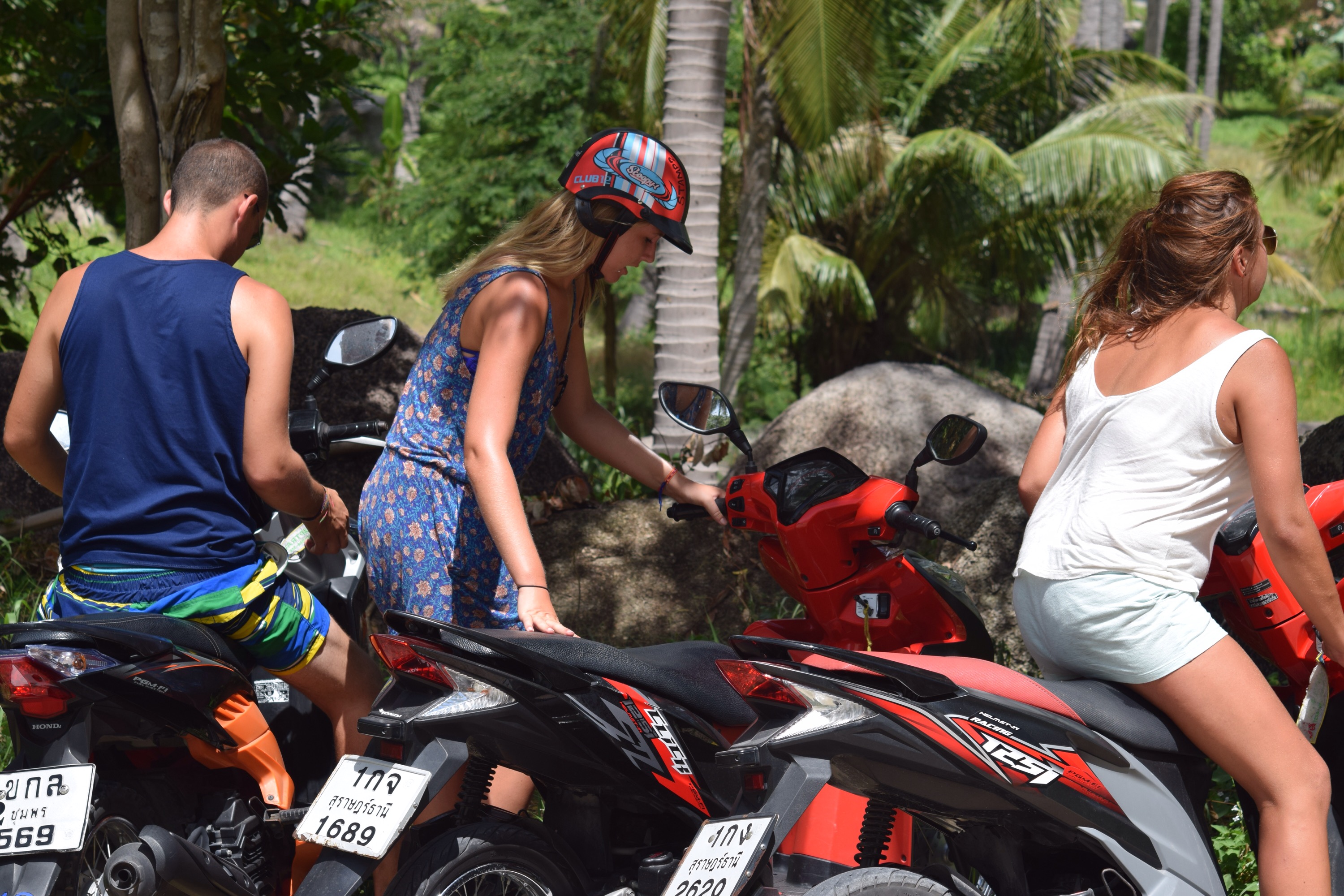 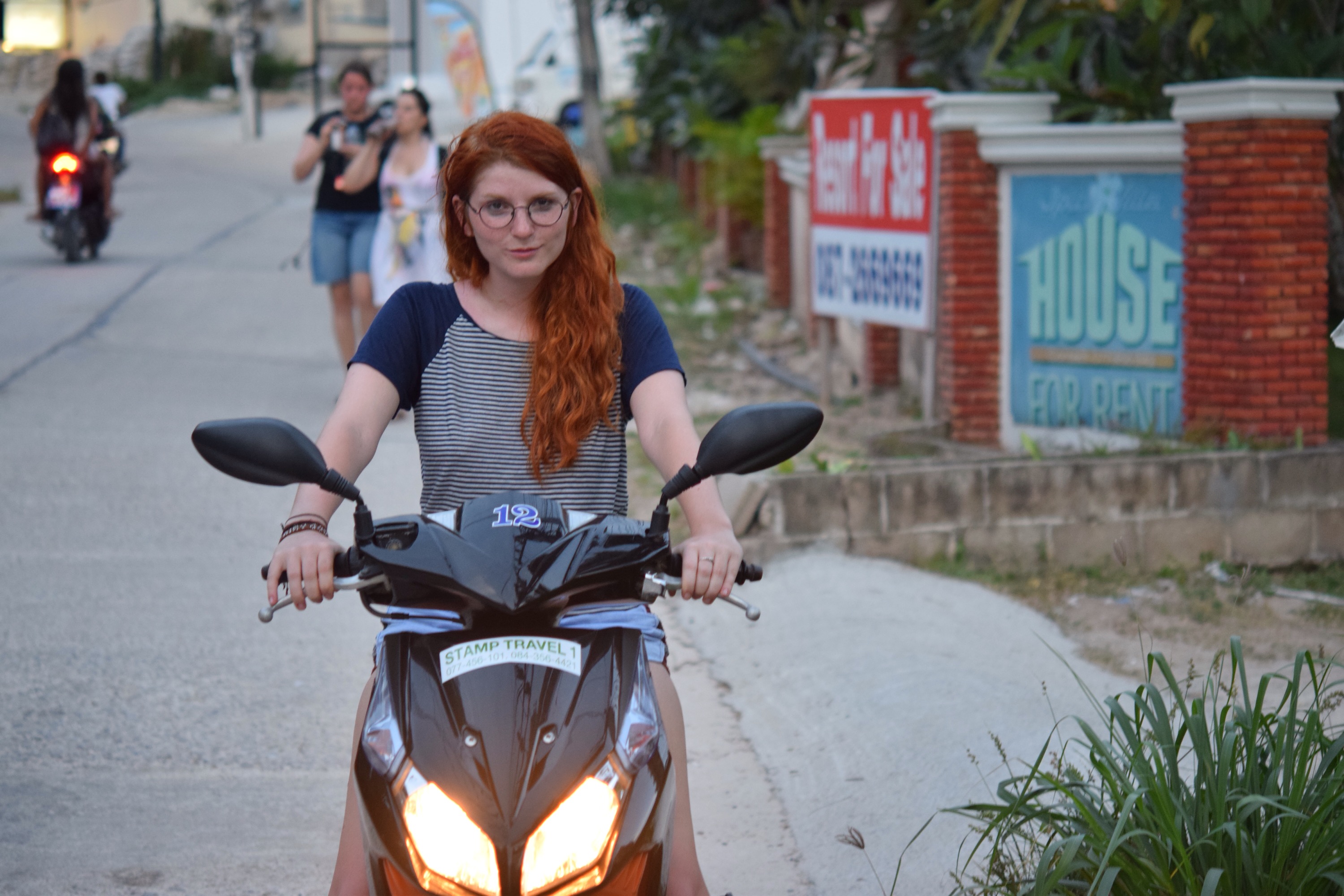 Current episode and next in Thailand:
We have had another interesting night. Our night boat to the mainland left at 9pm yesterday and turned out to be a huge slumberparty. The approximately 40cm beds lay side by side with back packers cuddling on them. Windows open and a few cockroaches in tow the seven hour ride was much more comfortable (and sleepable) than anticipated. Once in Surat Thani we waited at the bus office for one and a half hours for what we thought to be a bus, but what turned out to be a van. Huddled together the five hour drive to the coastal town Krabi on the westside of the mainland was only one and a half hours long. Here, we are waiting for another minivan to take us to our next destination: the island Koh Lanta. Lucy, a sweet German girl we met worked in an animal shelter there, and from all we have heard it is a great island. Excitement! We have another two hours to wait, though, before the three hour drive and ferry to the island, so bare with us.
What a week! Tim’s and my stay is just getting better, and we are already half way through. Anyone who would like a postcard, let us know. If you don’t get one, we probably don’t like you. No joking. If you don’t get one it means we forgot time and space on the beach. Also, go and rewatch the Beach now, because our next planned stop is Koh Phi Phi, and that’s apparently where the movie was filmed. 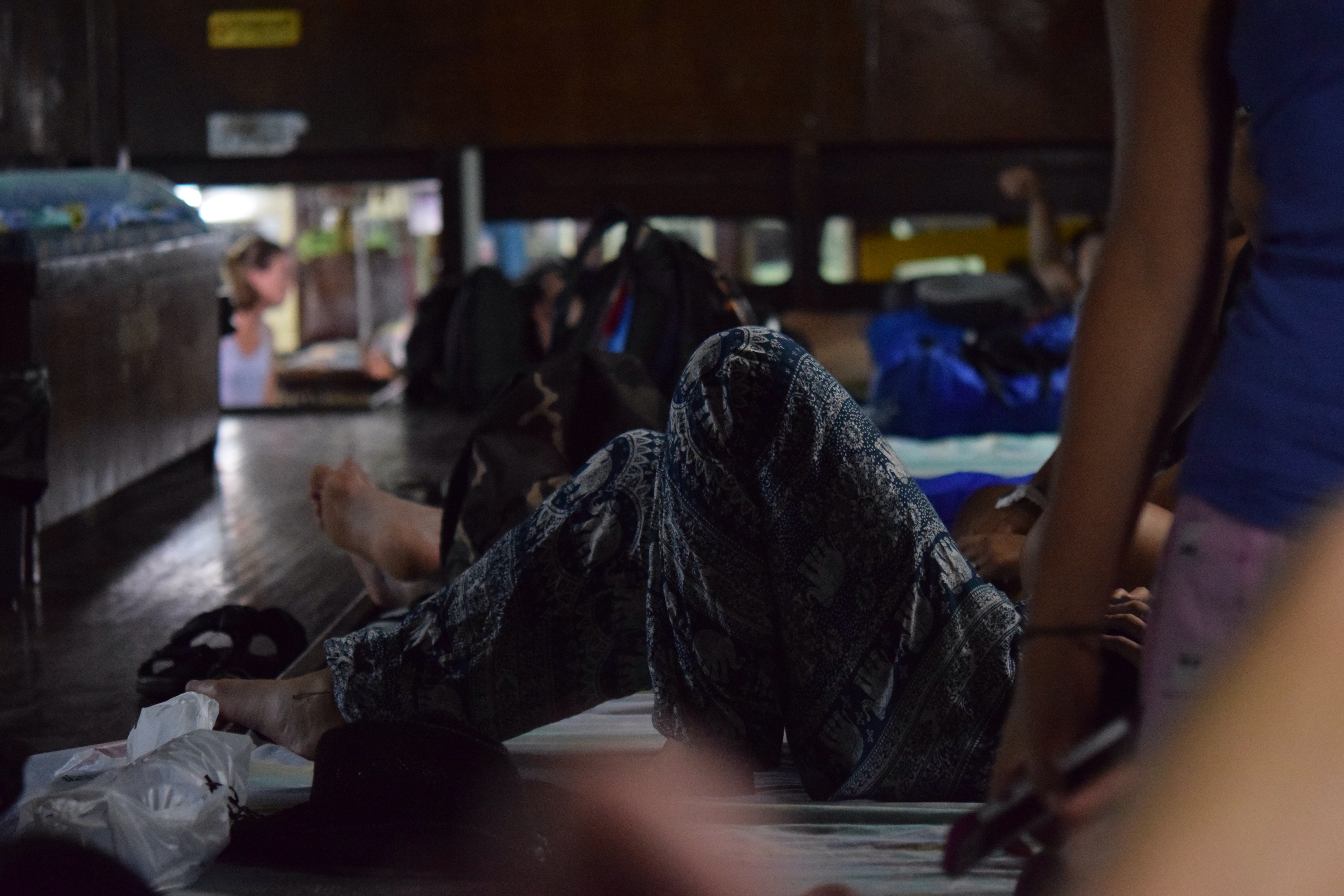 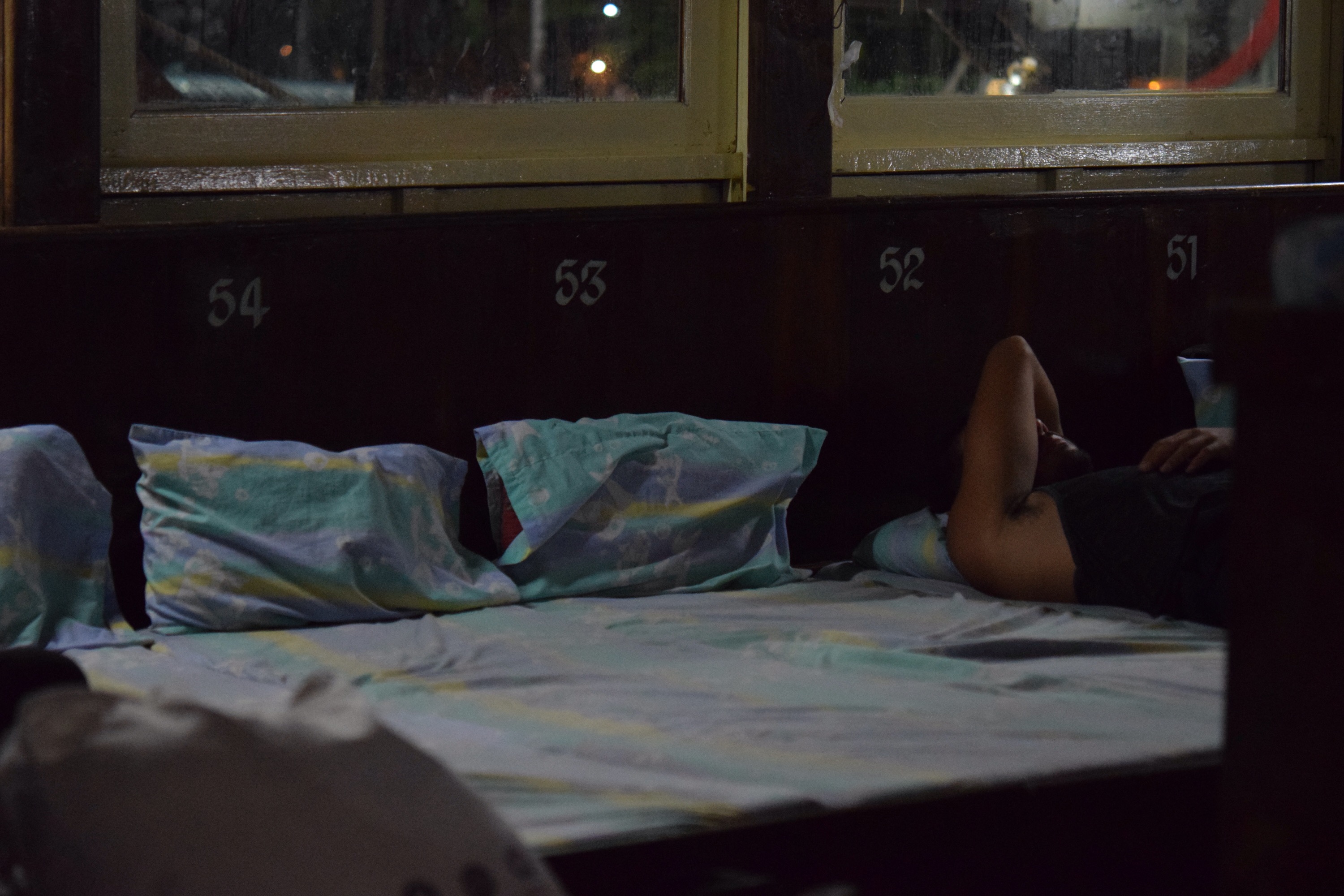