A month in Australia flew by in no time. Although the ten days I secretly spent in Perth seemed to drag on forever due to my excitement and anxiety about meeting my boyfriend for the first time in 2,5 years, even those came and went quicker than I would have liked. I spent time there visiting my host family from way back, discovering how the kids I used to look after changed and how they had stayed the same. It felt good to reconnect, to know I was still part of their family and they were still part of mine even though the email contact had broken off sometime in the last years. We played ball and board games together, the boys cooked for me, the girl and I went shopping and became sisters again. I taught her cards, the youngest taught me ukulele and the middle boy tried to teach himself to sit still. I dared to board a skateboard for him and sprained my wrist in the process. The other two I took Pokémon catching and sheltered Alastair, the youngest, in my big jacket so he wouldn’t freeze in the rain. After that he refused to take it off because, he insisted, it made him look like Abraham Lincoln. He likes using his imagination, playing with his surroundings instead of toys most of the time. One day he marched past me all dressed up in a space suit to venture into the galaxy of Backyardia and I was left smiling to myself. James played guitar better than I had ever heard him play, and Katie entertained everyone with a never exhausted pool of sarcastic remarks. We even got a chance to go down to the beach house and make use of the small windows of time when it wasn’t storming and pouring to be rewarded with a large group of kangaroos – I hadn’t expected to see them on this trip. 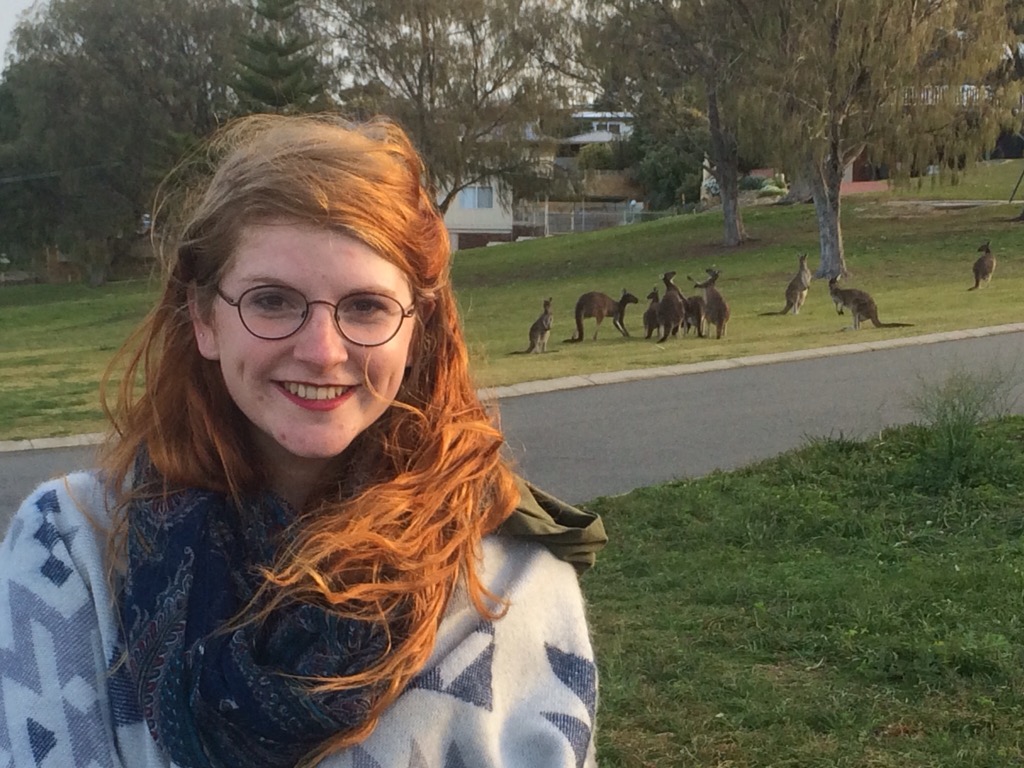 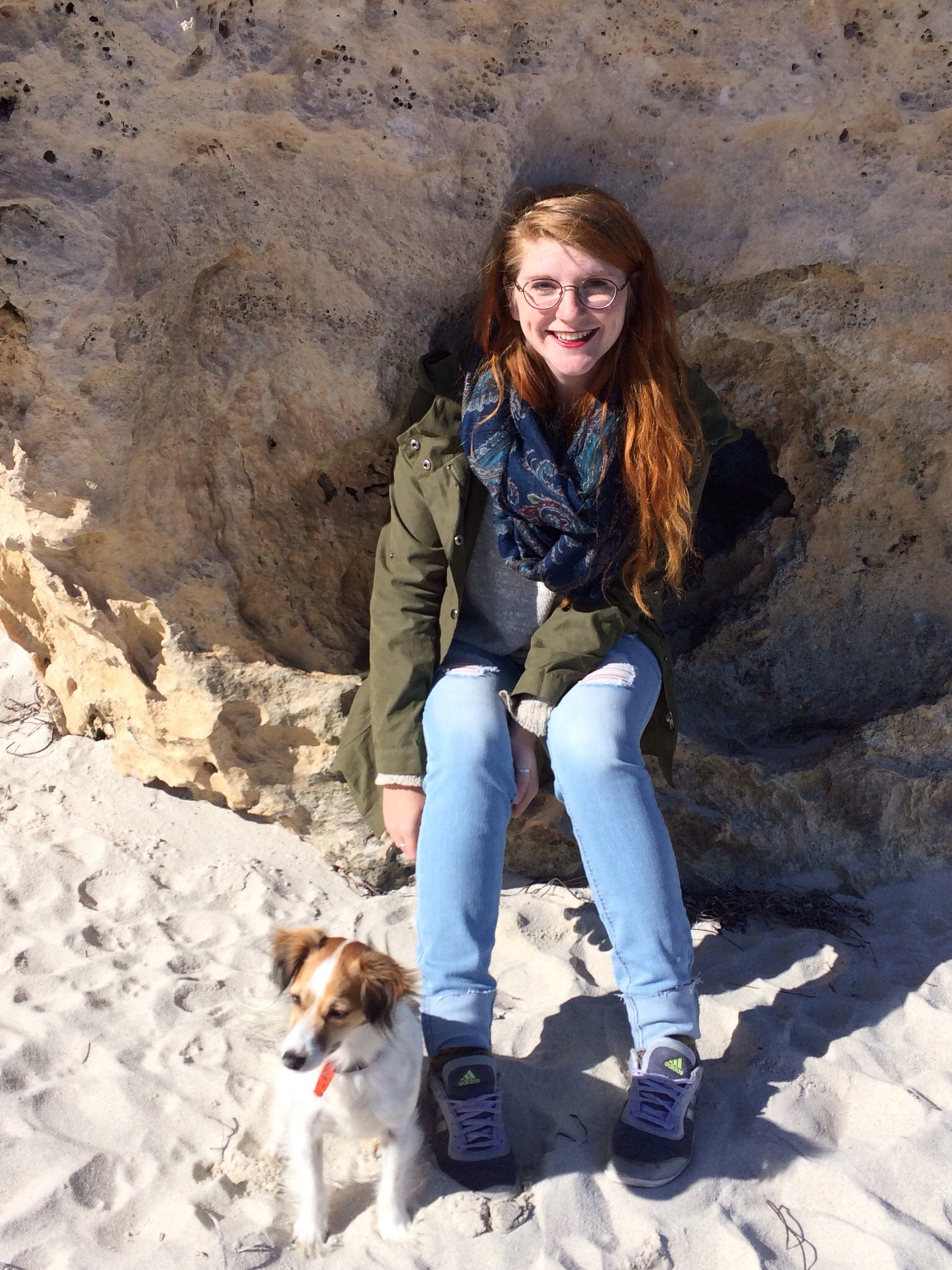 Oh, and did I mention I got heaps of dog cuddles? 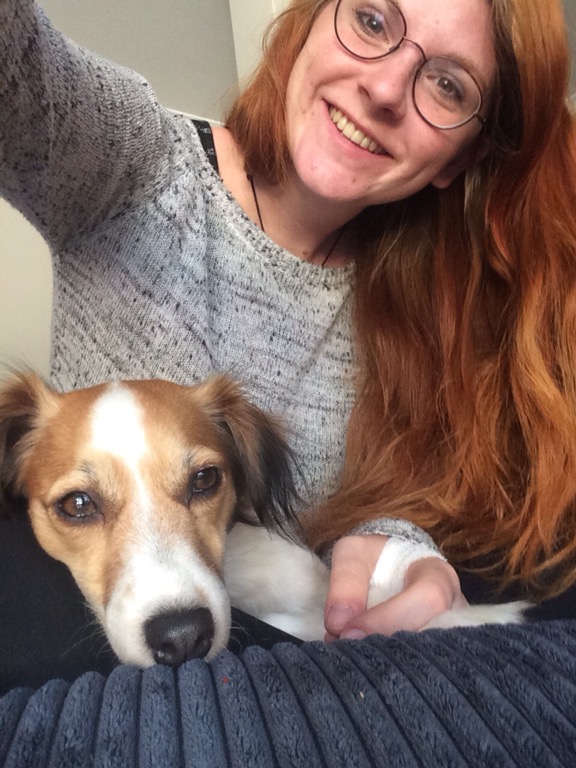 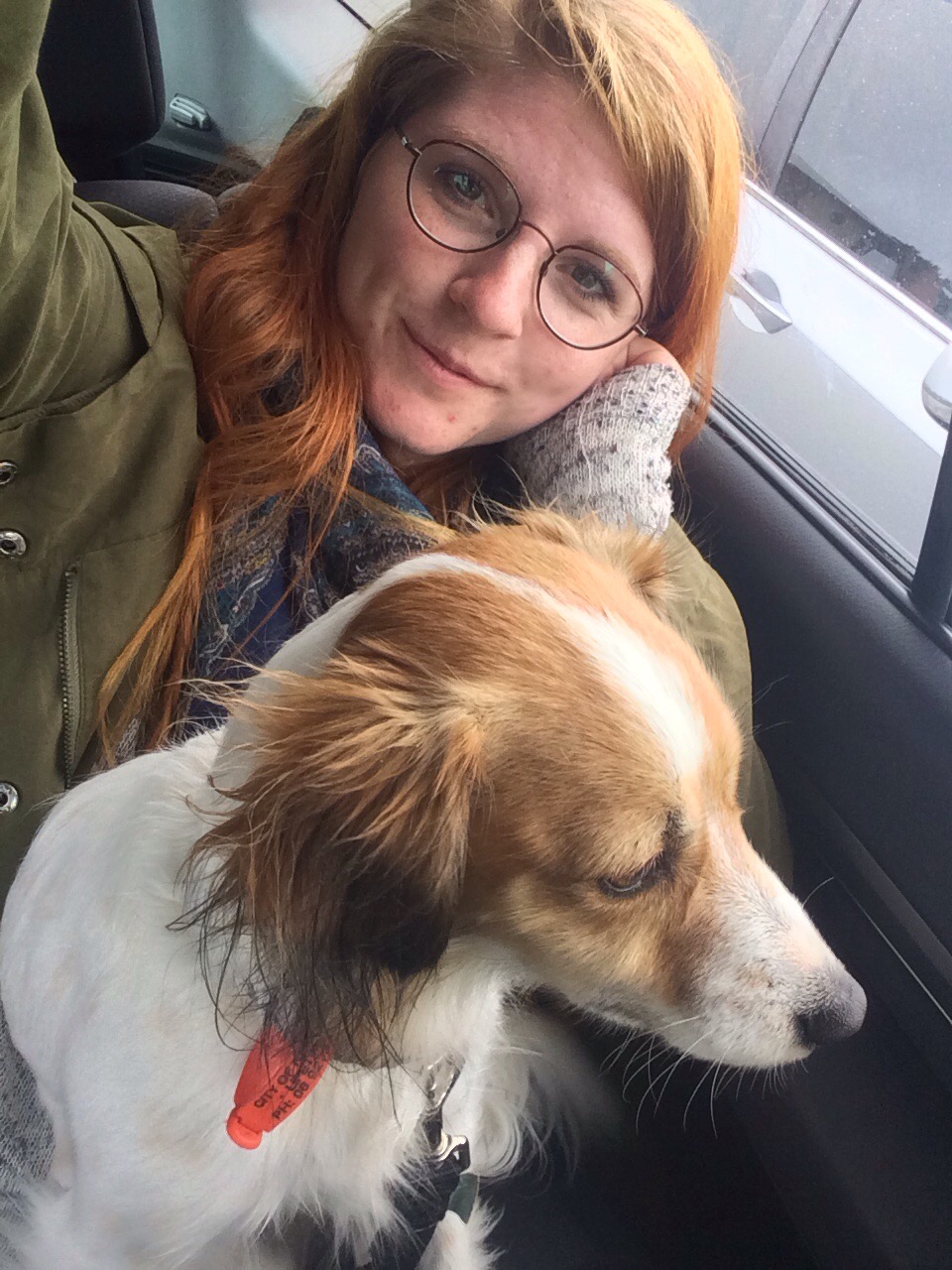 All the while I made my boyfriend believe I was in Bali still with my dad, sending him photos I had shot days if not weeks beforehand and fabricating little lies about true things that had happened during my day. A couple of times I was most certain I had blown my ninja cover, but he never said a thing so I kept it up. When it was time to fly to Melbourne I told him later I had simply dozed off after a stressful day, only to wake up later in the night. So far it had been helpful that Perth was in the same timezone as Bali, no I had one day left of acting like I was two hours behind him, when I was actually in Melbourne already, staying at his siblings boyfriend’s flat. Frankie was absolutely lovely and I felt very comfortable in his company. We ran some errands for him and ate Persian love cake in Brunswick, as I was searching inside me for a feeling about the remaining hours until I would surprise my boyfriend. There was nothing. My body was refusing to feel a thing except that it fluctuated between no appetite and then wolfing down whatever was put in front of me
When I arrived at Tod’s house I was welcomed just as warmly as I had been at Frankie’s. I stole a first glance into the chaos my boyfriend called his room and came up a plan with his housemate Quinn about how we should go about the surprise business. No one was quite sure when Tod would get home from work that day, but a few hours of tea still lay ahead. His sibling Aevi gave us a good fright when we mistook him for Tod, but it was lucky they were there, because they would end up being the one hearing the car door and ushering me into an empty room. I had left my ring on the kitchen table and the plan was for Tod to either recognize it and flip his shit or for Quinn to tell him she had found it in their old housemate’s room, to take him there and then for Tod to flip his shit.

It had been a long day for him. By the time Thursday came around he was usually tired and ready for his three day weekend, so the first thing I heard from my boyfriend was a whole bunch of moaning. Even the comment “I have donuts” by Quinn only received a delighted moan. It was hard to hear what they were talking about in the kitchen, and I am not quite sure how I felt at that moment. All of a sudden Quinn walked through the door and behind her Tod, a cup of tea in hand, his jacket still on and hair as fuzzy as I had never seen it. He was taller than I had thought, his face a little different than I knew it. He stared at me for the fraction of a second, then said “what” quite a few times. More like shouted, breathed, I don’t know the English word for this. A few “woahs” were in there, too, and then he left the room. Only for a few seconds after which he returned without the cup and continued with those two words until he just stared at me. I couldn’t say whether he was coping well or not. I couldn’t even say whether I was coping well or not. I felt strange. On the video that didn’t catch either of our faces my voice sounds strange, not like my own at all. I was awkward, I was uncomfortable, I was wondering whether I was ready for this. I asked if he wanted a hug, because I didn’t know what else to do and he was quick to take me up on that. What I felt in that moment I don’t remember. We sat down at the kitchen table with Aevi and Quinn who were mainly leading the conversation. I barely looked at Tod, but tried to take part in the conversation as much as I could. His housemates knew I didn’t want to be left alone with him yet, I was scared out of my mind. Most of that evening is a blurr. I remember sitting at the table and I remember sitting on the couch in the living room where I was to sleep. Tod read to me, and I finally felt myself settle down and start to feel comfortable with having him around. 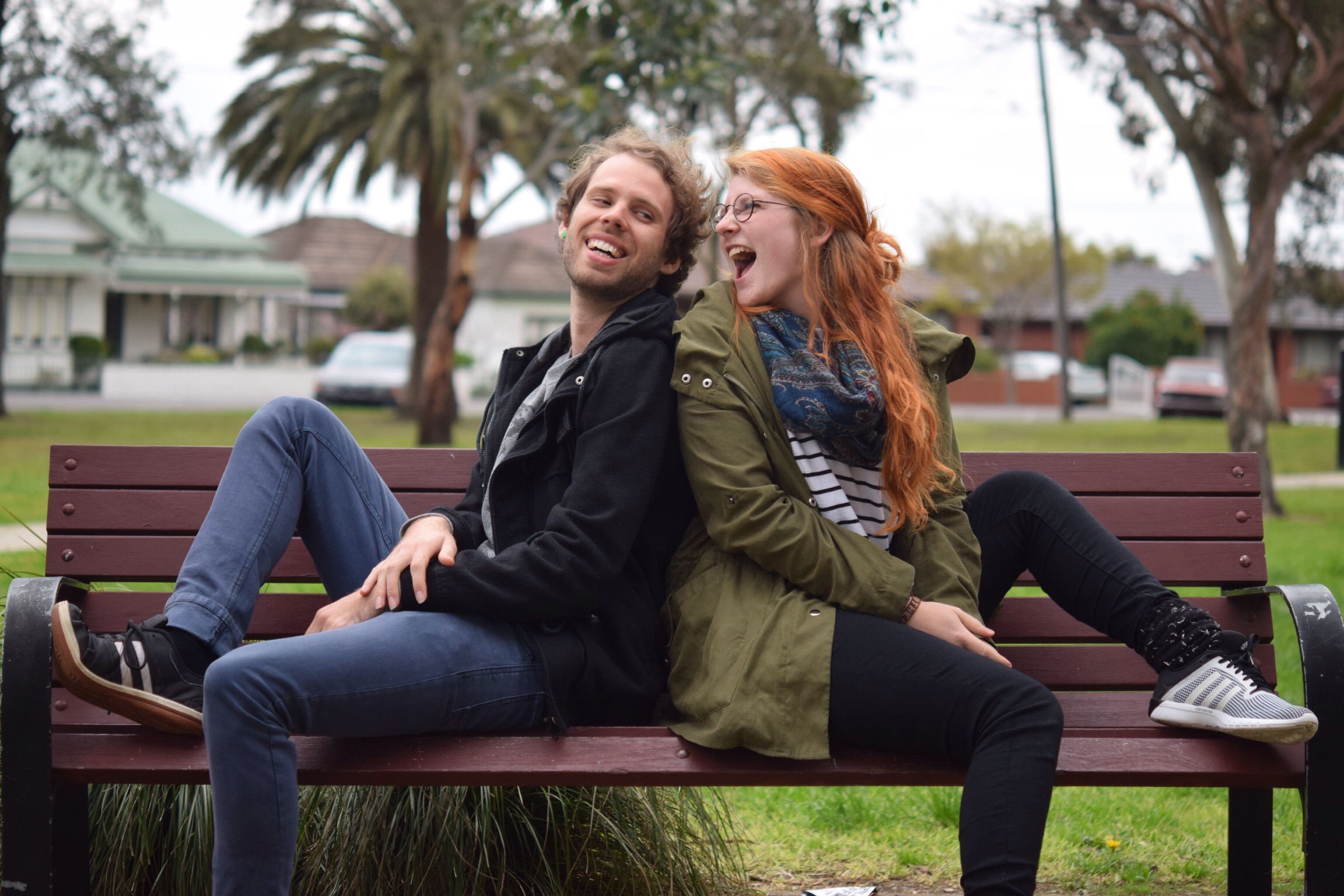 The next day we explored in the area a little. We were looking for a travel guitar for him, he went and got a hair cut and I bought us sushi for lunch. We took our first photos together that day, so I must have been feeling much more comfortable. Both days of that weekend we spent in Melbourne city, mostly around St Kilda because that was where we had met and spent the one day up to now that we had ever had together at. We raveled in our shared nerdiness having a picnic and playing Pokémon, going for walks along chapel street, sharing more sushi and Lord of the Fries, listening to music and becoming a couple. There were still things to learn about each other, there still are. Many, many things. As I am writing this it’s day number 25 we have spent together and so so much happened. Tod finished his job in Melbourne, we spent two long weekends at his parents’ farm which I want to write about in a separate post because it was so lovely, we shared huge pizzas, played Mario party, cooked together, moved Tod’s belongings back to his parents’, started planning our trip together, had our first little fights, went to the movies, and started making our List for Then become reality. 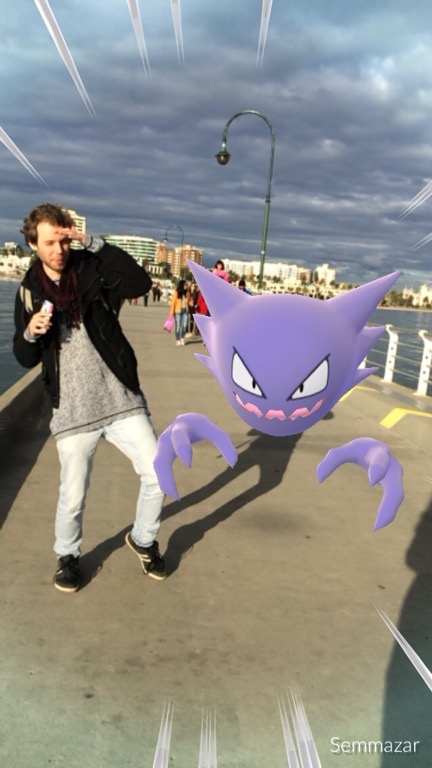 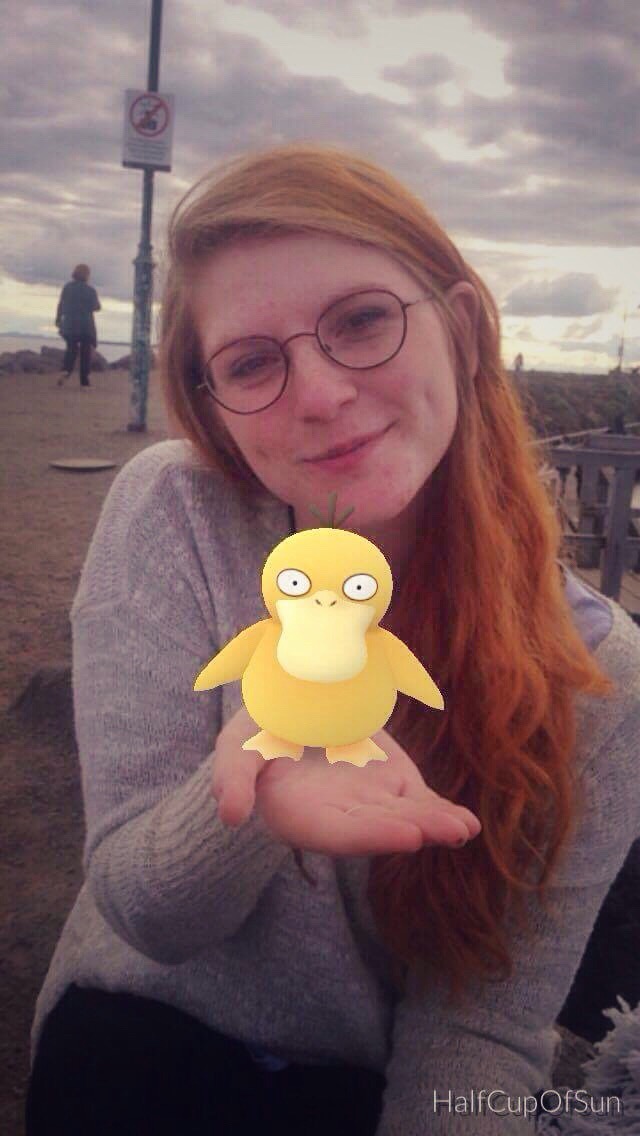 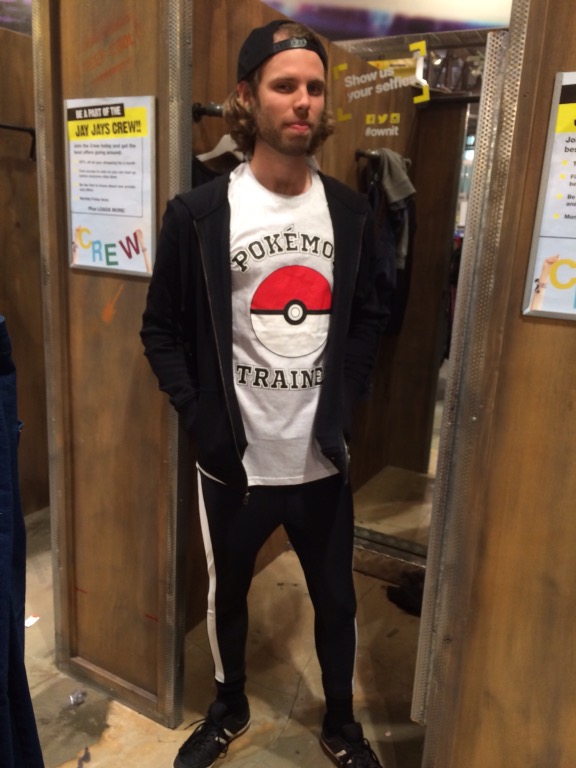 Now we are in Malaysia, and I finally have a moment to write this while Tod is playing guitar. I think he is working on a new riff again. It makes me happy to hear him be creative and productive while I am doing the same. If you are reading this, you might not care much about these accounts. I write them mostly for myself. No matter what happens, I never want to forget any of this. But maybe you have been in a similar situation, maybe you were curious about that moment I had waited for for so long. People imagined it to be magical, fantastical and super exciting. But that’s a movie moment it seems to me. The reality was awkward, clumsy and scary, and I’m pretty glad it was. A moment like that is hard to stomach, but luckily we both still managed to eat a fried donut that day. There must always be time for the important things in life.
﻿ 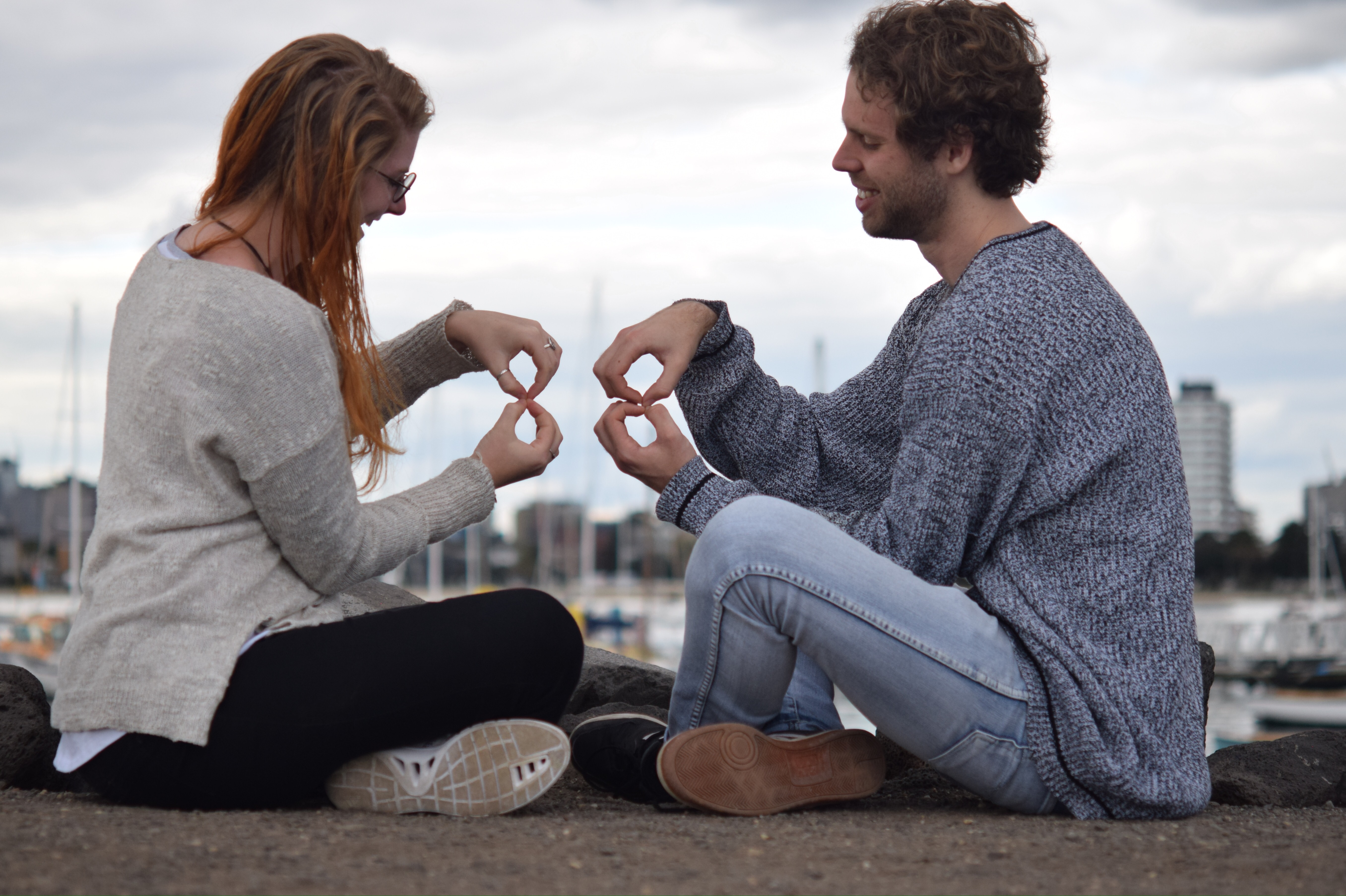