I have woefully neglected my blog, which usually while traveling is a good thing! It means I’ve been too busy to write, right? Or maybe too sick. When we left Kota Bharu at ca the end of the month we didn’t know where our time had gone. We hadn’t been to all that many places or done that much really.

There was KL where we stayed in a lovely airbnb a little whiles outside of town, meaning we were required to have our first uber adventure. We found it to be a bit daunting at first and took some minutes to find our way around the app, but soon we were ubering all over the place. Since we arrived late at night after fifteen hours of travel we let the Pakistani lady who was staying at the same place take us to a small restaurant near by and had a wonderful meal with her. With our flight leaving to Kota Kinabalu the second next day, because we couldn’t find a good one leaving that exact same day, we only had one to spend inside Kuala Lumpur. It took us to the Petronas Towers and the KLCC park next to them where we had a walk, as well as a lie down and read later, before taking the pedestrian walk way over to the Pavilion mall. Really we didn’t do much in terms of sightseeing. We let the abundant choice of street food overwhelm us and took some refuge in the park. It was Tod’s first day in Asia and first week off work, so we decided to push bigger trips to the back when we were planning to return to the capital before our flight on to Germany. By the looks of things, that might not be happening. 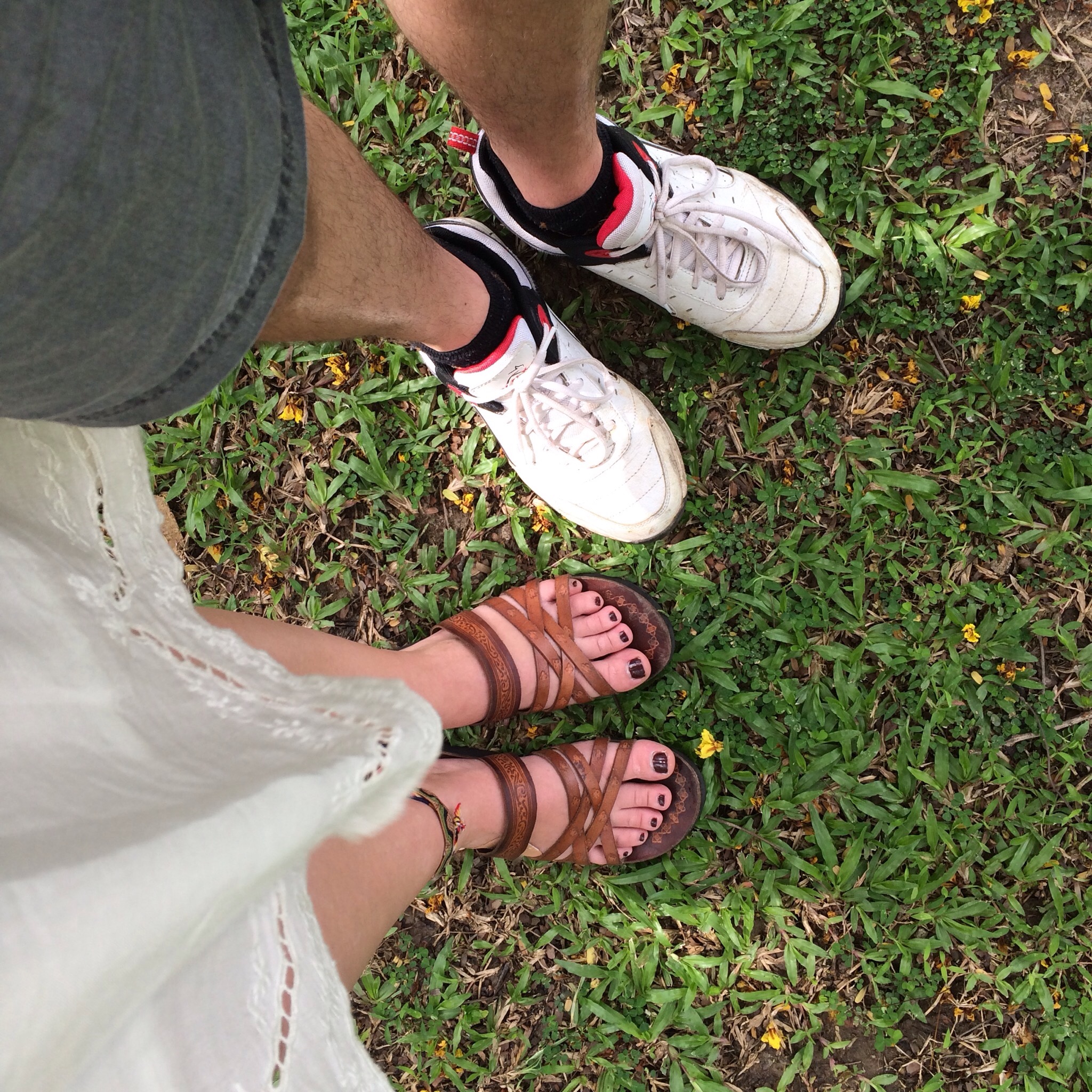 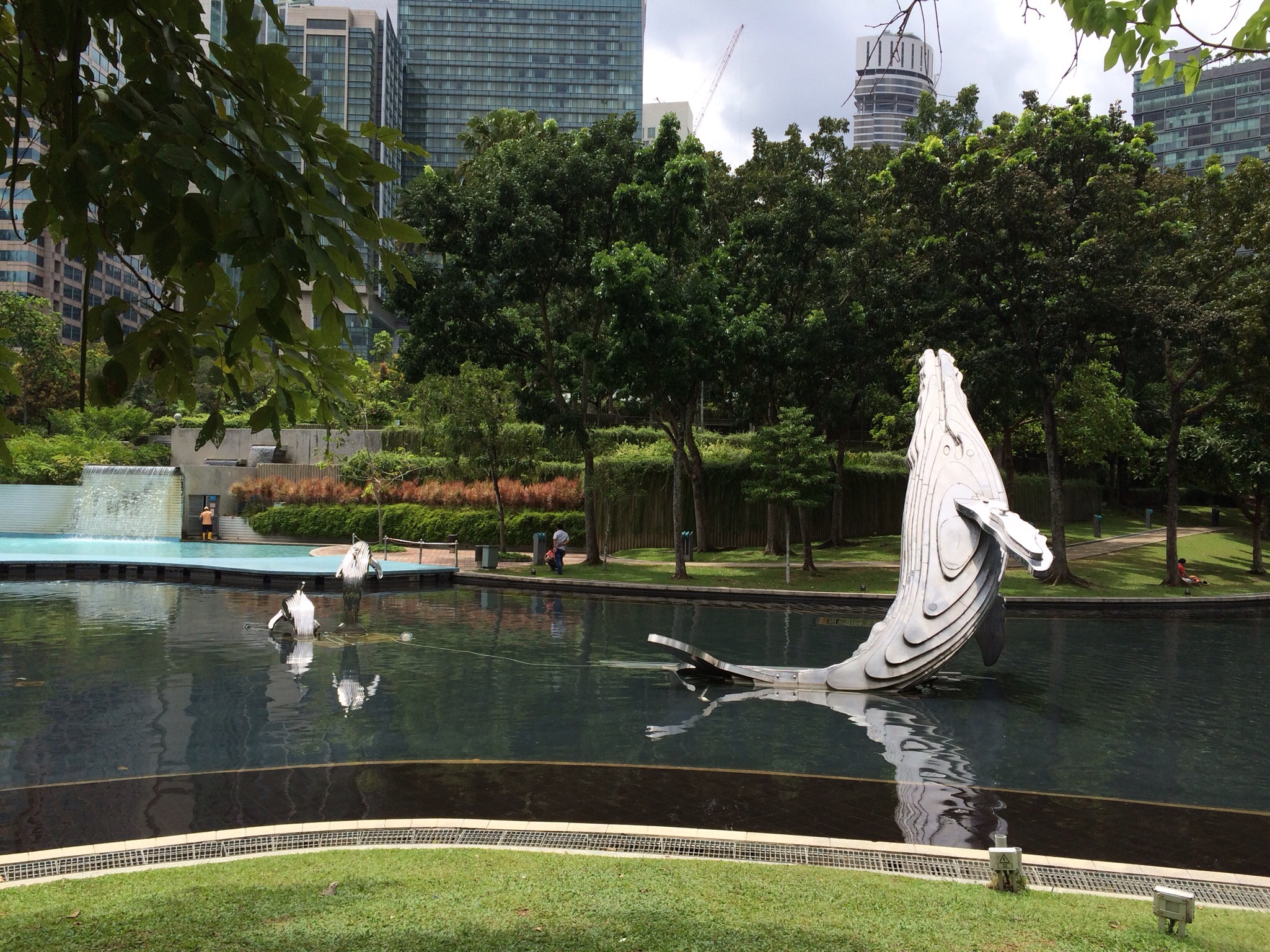 Kota Kinabalu was a very different story and also reminded me much more of the kind of backpacking I was used to. It was probably effected by staying in Akinabalu hostel right on Gaya street, surrounded by great food options and filled with lovely people. The two other guests in our four bed dorm, Els from the Netherlands and Bruno from Sweden, were wonderful. We began chatting since it’s always nice to know your dorm mates and then in a flash went out for dinner at an Indian restaurant, where Els and I shared food and Bruno his inside stories on the life as an Ikea employee. Boy, they were good. Whether it was the actual stories about countless police visits to find lost children, children calling out for parents who were actually shopping in the store next dore, the guy who had his ear bit off by a frustrated customer, or Bruno’s one of a king way of telling them, it was agreed that this would make a good reality TV show. If you know where I can hand in this idea, please let me know and I will. 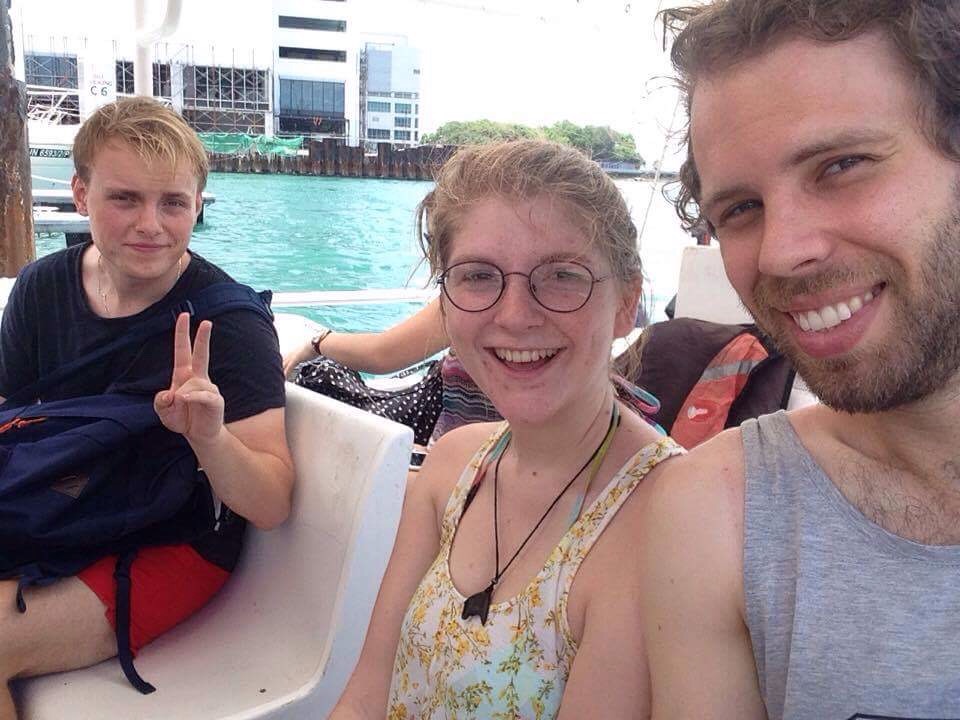 The next day we took the ferry to an island with Bruno who complimented who little we made him feel like the third wheel. Honestly, this was pretty great to hear. We weren’t looking to be the couple who would avoid social contact with anyone but each other, and hearing that we didn’t have to put in an effort to make that happen felt good. As the boat skipped over countless waves towards the little islands scattered by KK’s coast, a storm began brewing over the city. We could see it looming glumly over the coastline while we were jetting towards a clear blue sky. Indeed the storm remained on the mainland for quite a while, while we were only drizzled by a few drops while we were frolicking in the temperate blue water, before drying off on our sarongs. Tod and I went on reading Momo together, a story I and most other people in Germany grew up with, but which was completely foreign to him. We devoured watermelon and delicious nasi lemak, rice with a spicy sauce wrapped inside a banana leaf, that I had spontaneously picked up for 2RM at the jetty. It wasn’t the only exciting food experience of the day. When we met up with Els for dinner she told us we were meeting her Malay friend who wanted to show us a good place. It ended up being a Chinese stall selling pork – all of it. Before we knew it Timothy had happily ordered and we were eating pork ribs, meatballs, liver, intestine, kidney, stomach, and ear. Naturally, I didn’t like all of it, but some was surprisingly good and I know I wouldn’t have tried it otherwise, so I’m grateful for the experience. We’ve tried to ask for tips on food more and usually when someone says anything is good, we just go with it and try. It’s turned out to be a good tactic. 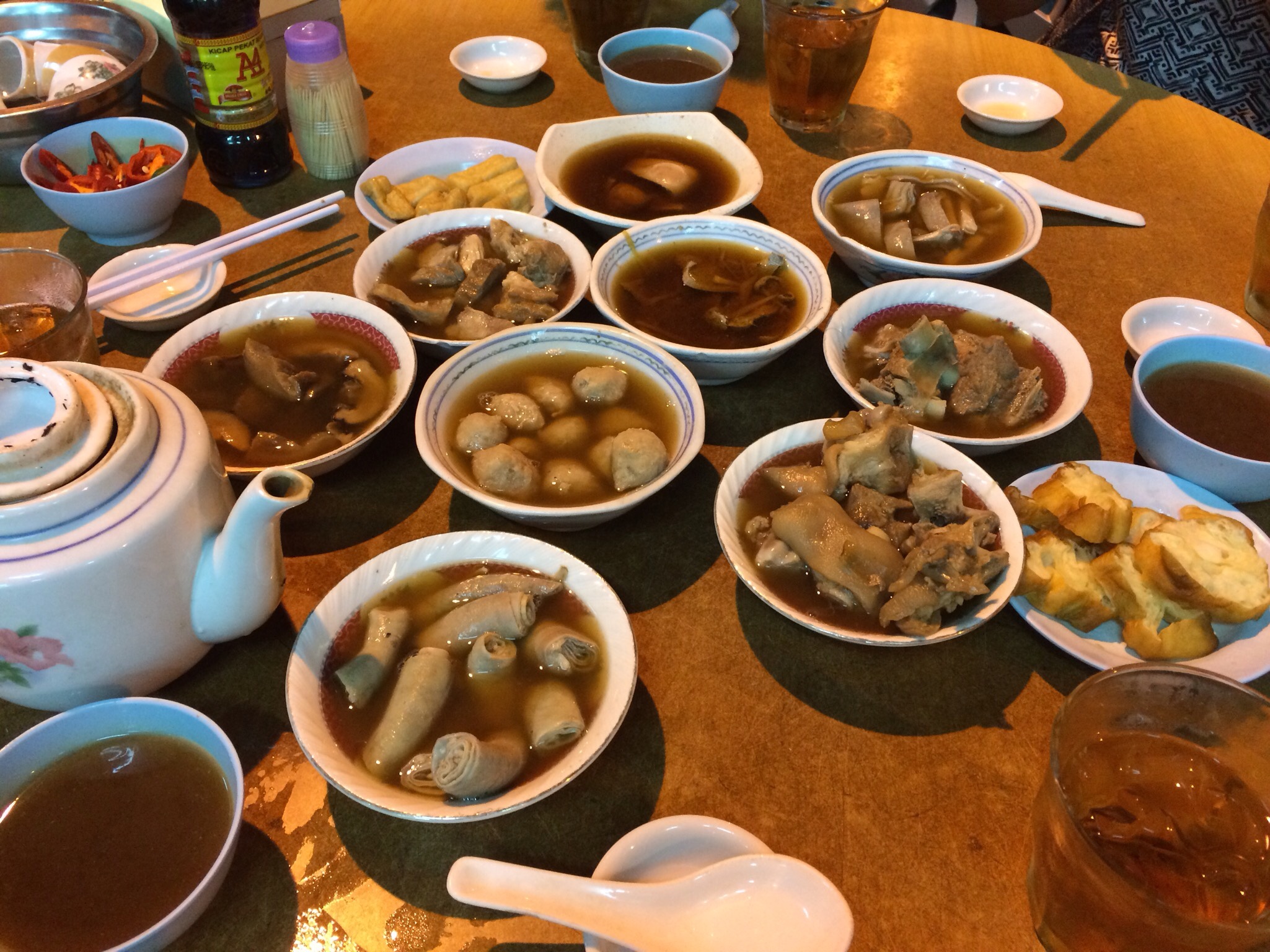 Our Kota Kinabalu experience ended with a tipsy night of beers and radler, playing cards, learning magic tricks and this is my favourite, figuring out how one of them works exactly, since Els knew how to do it, but not why it worked that way. We also played a strange game of spoons, where we had a girl from a school trip hide three spoons for us and as soon as one of us had collected four cards of the same kind, we scrambled around the common area rummaging to find a spoon, much to the amusement of the other guests there. 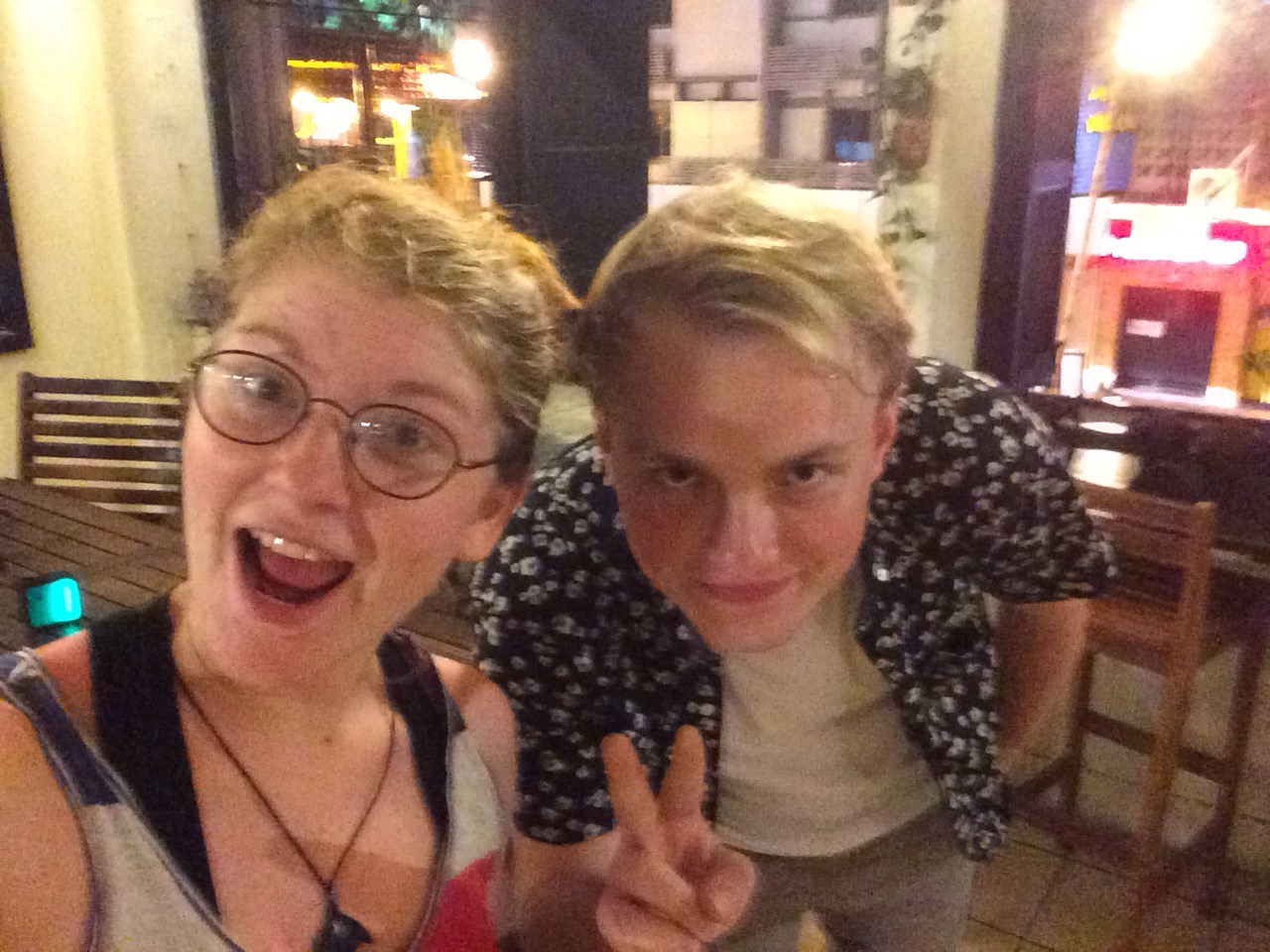 Come to think of it, I don’t know what exactly we did in Kota Kinabalu, because the time we spent there is the same as in Kuala Lumpur, but for some reason it seems like we were in Kota Kinabalu for much longer than that. Maybe it’s because of the people we met, or because some of those experiences were firsts especially to Tod, but this first stay in Kota Kinabalu has a comfortable spot in our memories. It also helped us figure out where we wanted to go next, so that a long bus trip to Sandakan awaited us.