Oh, Cambodia, it is nice to see you again.
As you can tell we have survived our eight hour bus trip from Bangkok to Siemreab. Tim arrived yesterday and fell in love with the hostel and its inhabitants just as much as I had before. 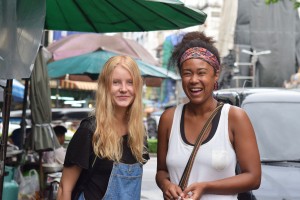 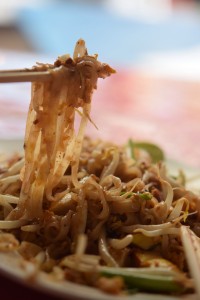 After a rather calm day in which I packed and he treated himself with a massage, we headed off to Khao San road with a funny bunch of internationals. Sam, Yash, Amalie, Stu, Tim and I presented five countries from three continents, and it was a mix made in heaven. All we really wanted was to dance, so when we couldn’t find a cool bar to dance in, we chose a hard rock bar and made it danceable. It is still undecided if we scared potential customers off or increased their number. 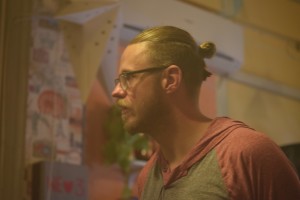 Sam is an amazing dancer and by the end was so drenched in sweat that a piggy back ride left me looking like I peed my pants. The swaying piggy back ride also had an advantage, however, it scared off all the street vendors and ping pong show advertisers. They are incredibly annoying and keep smacking their lips to get tourists attention. So at some point we started reacting to them by asking if we could be in the show. They nodded and offered to pay 300 Baht for it (7,5 Euro). Yash and Sam did not agree at all and said I was worth a lot more than that, the vendor walked off by saying “she’s not pretty enough”. And all the guys exploded. “Don’t listen to him, Shirin, you are beautiful.”, “they could just never afford you”. Yash even went after him to hit him, but I am glad he didn’t catch up. To me the whole scene was rather amusing on both parts. The street vendors did seem to have some sort of issue with me. A few ladies sell bracelets with weird phrases on them like “F* off Steve”, “I love Lady Boy” or “Give me your d*”. These are the harmless ones. One lady was very persistent in trying to get Sam to buy a bracelet, and her last attempt ended in pointing at me and then offering a bracelet saying “Ginger C***”. Gladly my skin is elephant thick 😀
One thing is sure: we proved to Khao San road that we can be the most fun people around without being hopelessly drunk. 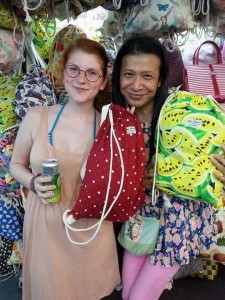 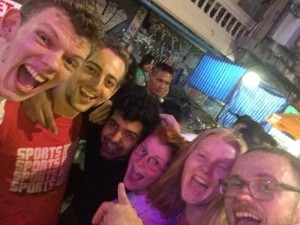 Needless to say, Tim and I got very little sleep. Sam decided to sleep walk in the middle of the night and take Tim’s iphone to bed and at six we already had to get up to leave. Beside a short visa scam attempt before the border nothing exciting happened on the way here, and after checking in we met up with Chantrea, our friend from last year. What a character still. Tomorrow we will pay a visit to the temples, and for tonight we just treated ourselves with a walk over the night market. It’s pretty close to the hostel, no tuk tuk needed. Here we also tried a dish of frog meat – actually quite tasty.
What’s left to do tonight and tomorrow is to decide where our journey will head after returning to Thailand. Down South for sure, but on which route and for how long… We will see.