Once upon a time in a fantastic realm, there lived a Princess. Her world was inhabited by creatures called Pokémon and the Princess played with them as if they were her friends. However, there was something missing in her life – from early on she had been told that every Princess needed a Prince, and that was what she truly wanted. It was a Prince she was thinking of one day, when she lay by the duck pond’s water, watching the Pokémon play underneath its surface. As she was dreaming of what her Prince might be like, a Magikarp’s crown rose above the surface not far from where she was playing with the water. 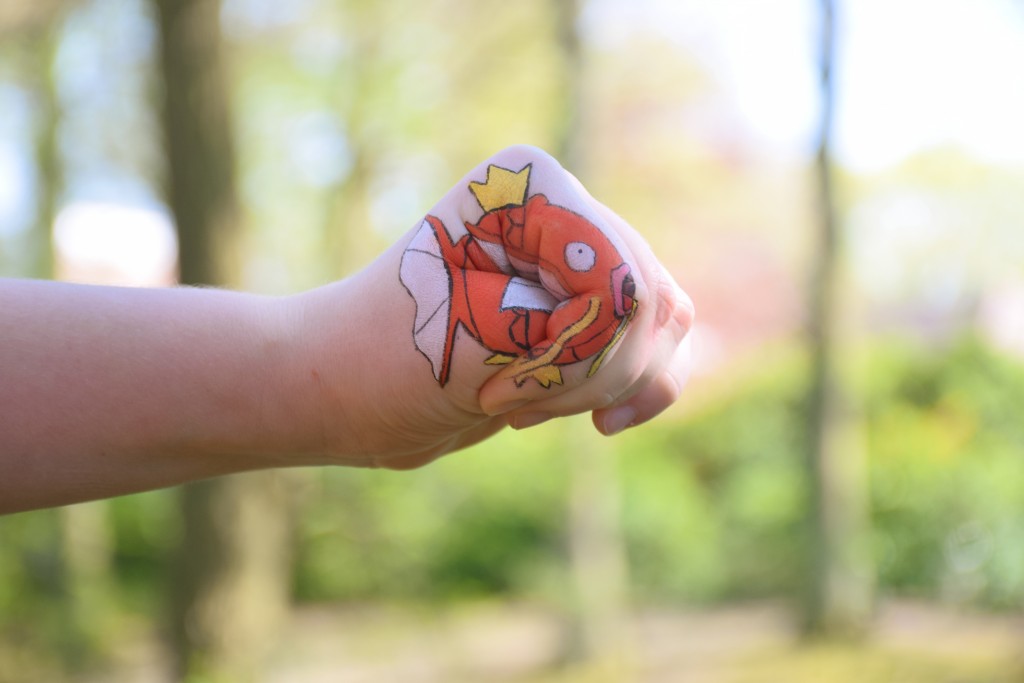 Everyone underestimated the Magikarp, she knew it. The orange of its scales was rich and satiated and its gorgeous crown reflected the sun rays more intensively than the water. It deserves more to be laughed at, the Princess thought. Surely, inside its voluminous body it must be harbouring a secret. Swiftly yet gently the Princess fished the Magikarp from the water and held it in her hands. She had seen the other princesses try with a Froakie – or worse a Politoed. Every princess tried it once in her life, albeit they never spoke of it. None of them would want to admit how desperately they were seeking love. 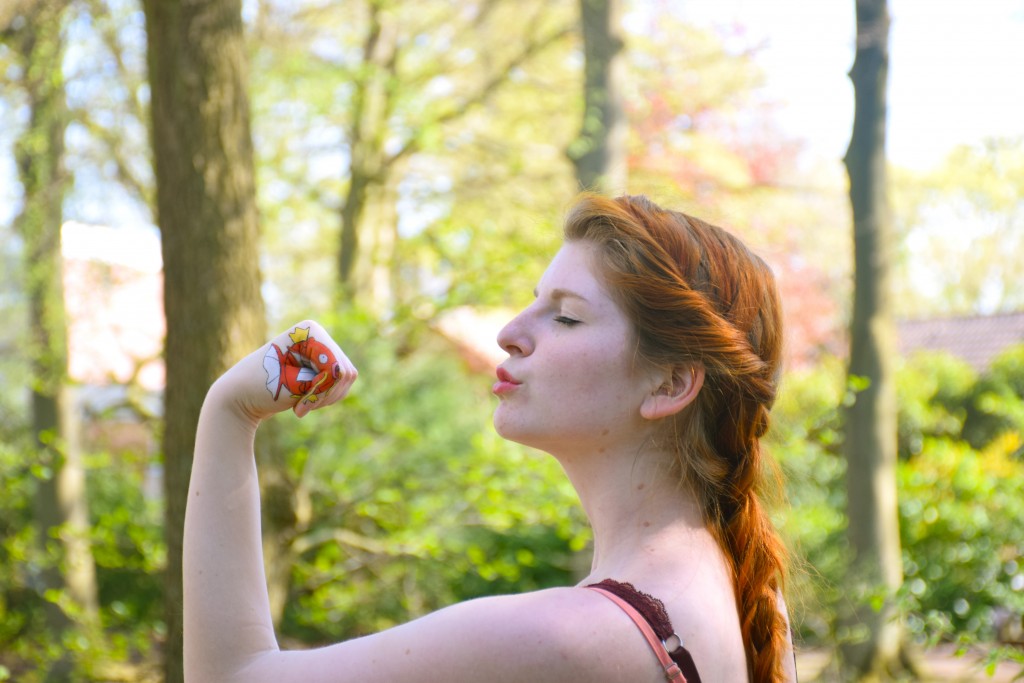 The Magikarp wriggled slightly between her fingers, and stared at her with its big trusting eyes. What did Froakies and Politoeds hold on this beautiful creature? They were brute or cute, not polished like a good Prince should be. Magikarp even wore a crown, how could it not be? With the firm belief that she had uncovered the secret of Prince Pokémon and with the goodness in her heart, the Princess placed a soft kiss onto the Magikarp. 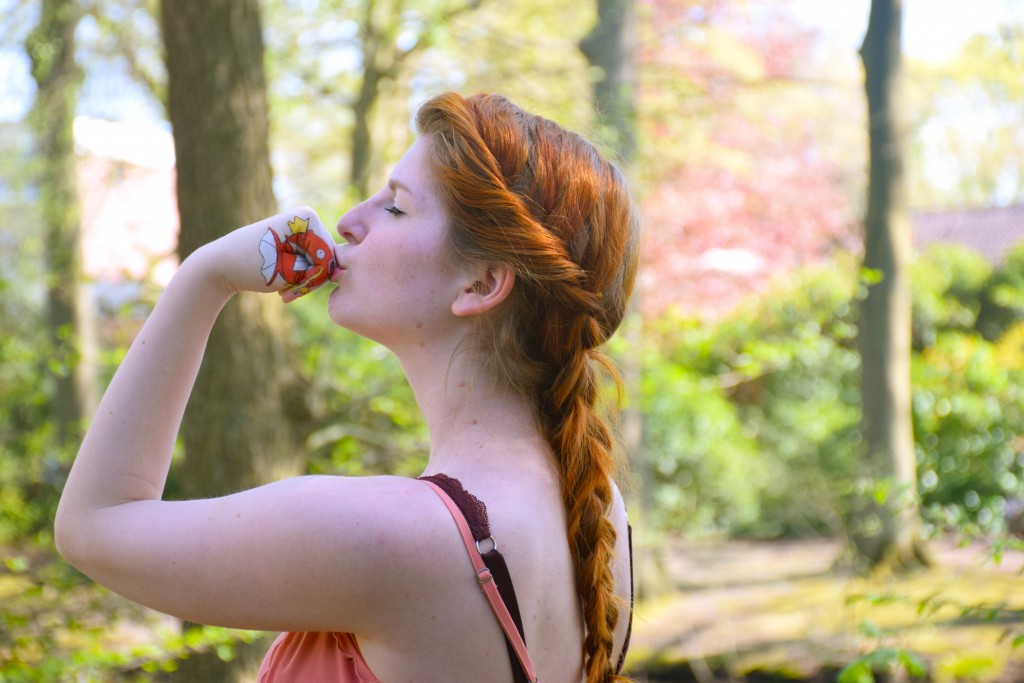 It was as if she was spun around by an invisible force. Magikarp’s weight in her hand receded until she felt it there no more. All of her seemed lighter, as if she was beginning to float. The world before her eyes faded out, and suddenly she was embraced by the cold.

Water, she realised. The lightness, the cold, the change before her closed eyes. She must have fallen into the duck pond. Although she was not bound by algae nor a Pokémons wrap, she wasn’t capable of pushing to the surface. Her body was aching unfamiliarly, tearing at her skin. When she couldn’t take it anymore, she abruptly emerged from her subconsciousness. 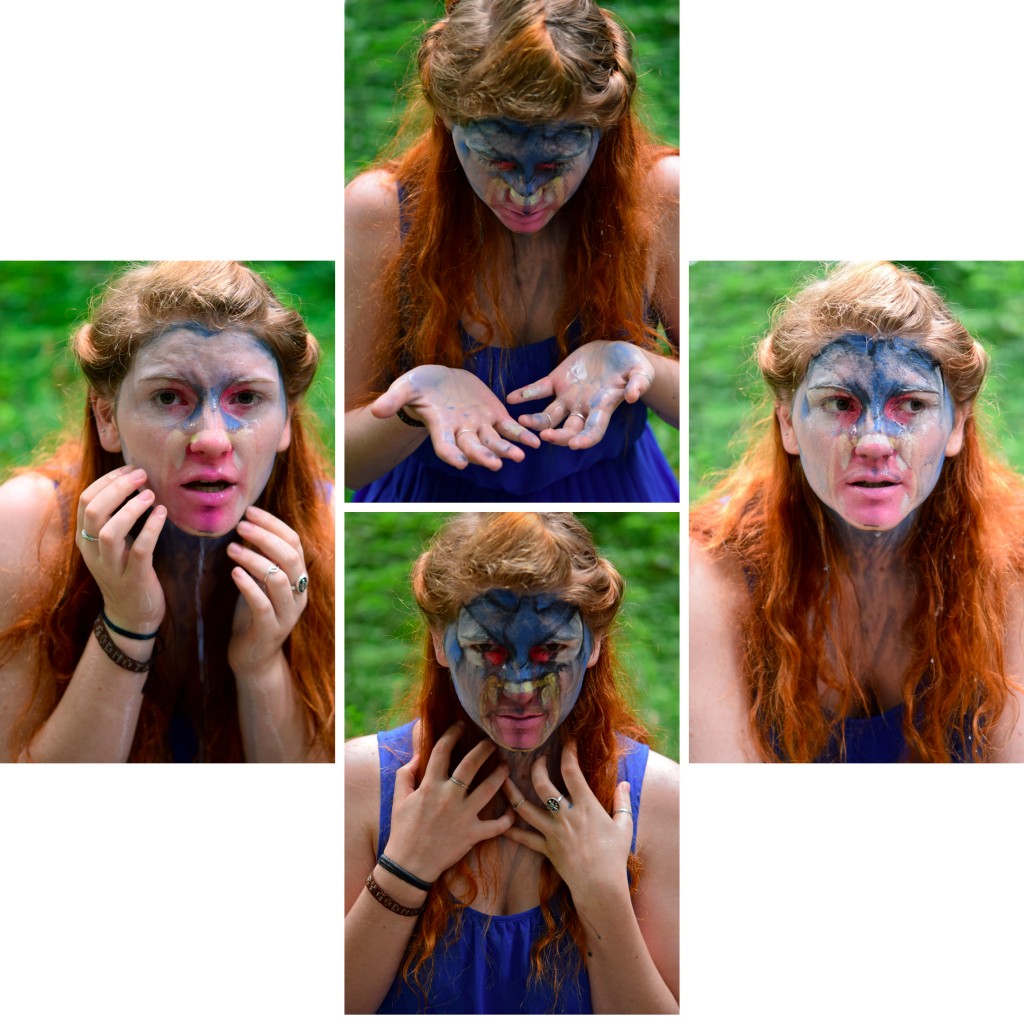 Magikarp was gone, and so was the Princess. Left behind was only a mask of horror and wrath to terrorise passersby until it would find its master. 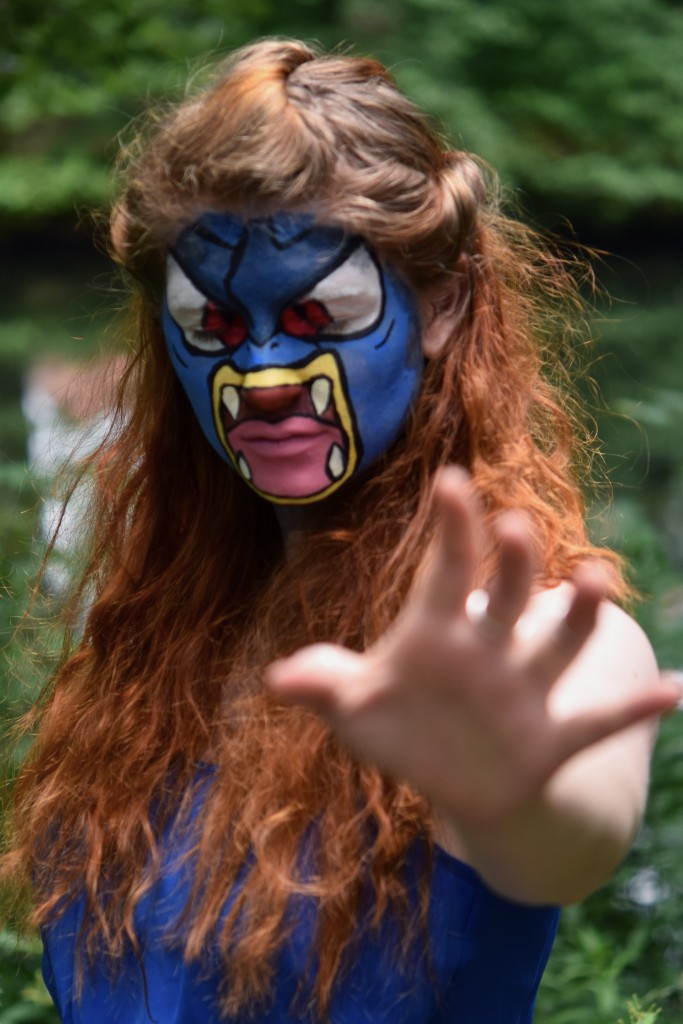 It is true that I am a strange person, but I didn’t come up with this idea entirely by myself. Months ago a friend demanded that I paint a Magikarp on my hand and give it a kiss within the time limit of a week. I failed to come through and therefore, had to extend upon the challenge (this is a long story short).
I decided that as a consequence to kissing Magikarp, I would have to turn into a Gyarados in good old Princess story fashion. Although I took care of the Magikarp part of the equation in May, it took quite a while until I found time to evolve. It has nothing to do with Pokémon Go as the idea was conceived in March, but I do find it kind of funny that they chose a Gyarados for their loading screen, haha. Now, if any of you Pokémon trainers out there are looking for a Gyarados, check out the duck pond near my house. I heard there’s one out there.
Thank you so much to my two amazing friends who helped me evolve! 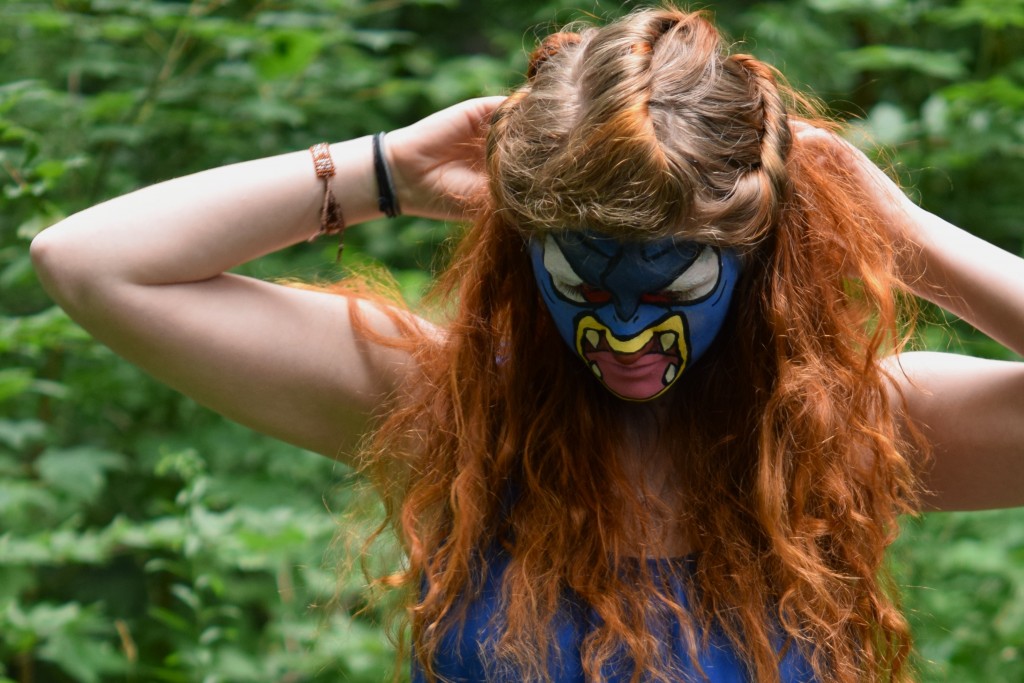 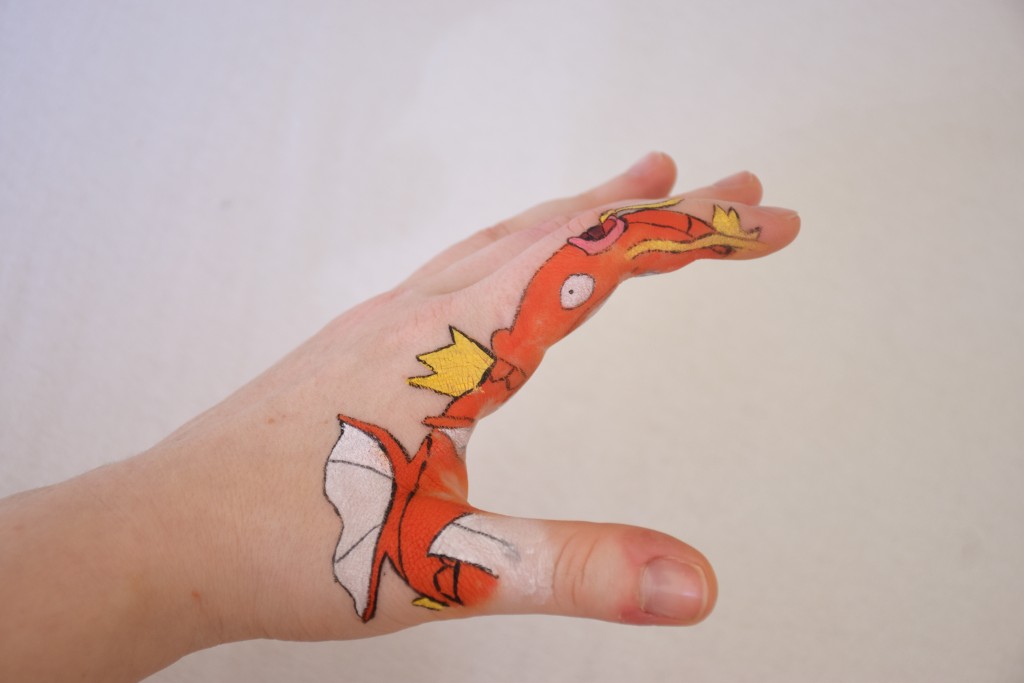 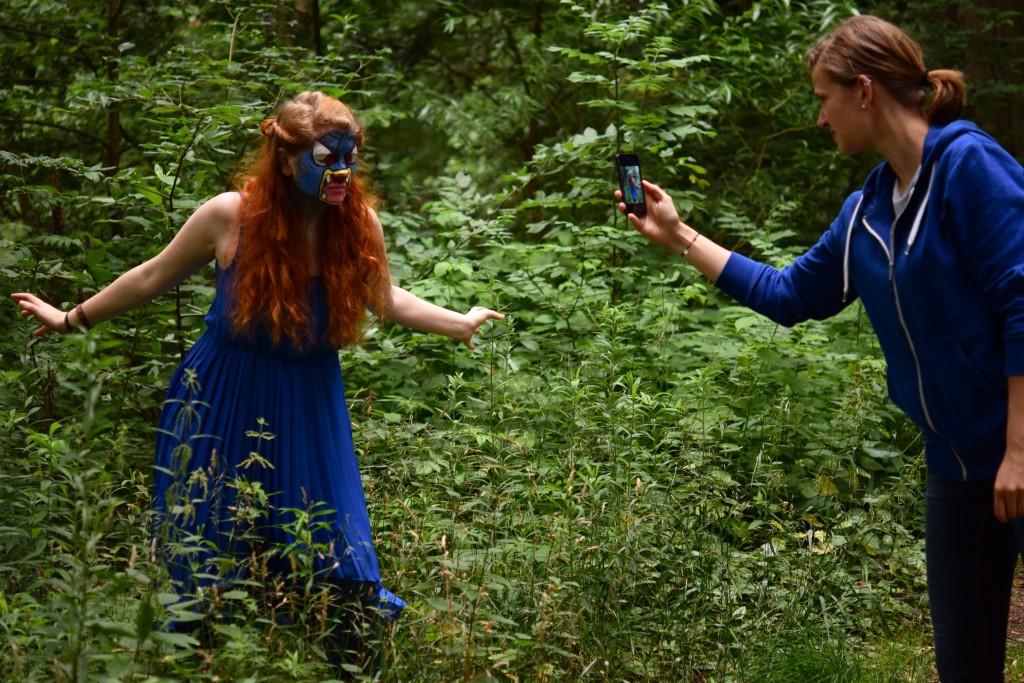